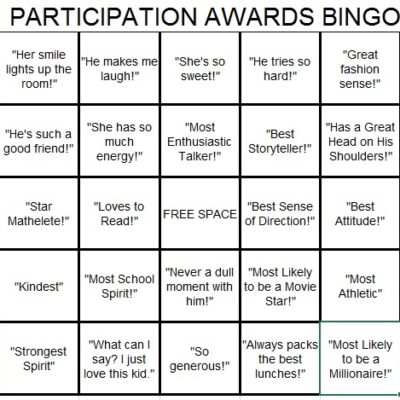 As the school year winds down, we find ourselves joyfully celebrating our children’s successes and patiently celebrating the successes of the other children in their classes that we might or might not know.  Yes, I’m talking about awards night, or, more to the point, awards nights, plural.  Everything has an awards night.  Each sports team, each club, each band, each grade, and each school.

In kindergarten, this was kind of cute.  The teachers would find something nice to say about every kid and give them an award.  Even the kid who bites gets an award for being the “most spirited” which is lower grade teacher code for “least able to control.”  Since there are only 20 or 30 kids in a kindergarten class, and since even the most monstrous of 5 year olds is still kind of adorable with a modicum of innocence, it is kind of fun to see what the teachers will say about each child.

Now that my babies are both teenagers, however, and I’ve sat through upwards of seven million participation awards ceremonies, I find the whole process rather tiresome.  I’m not convinced that a 16 year old who is plenty old enough to know that if you work hard you get rewarded and if you don’t, you don’t, needs some kind of participation award in order to keep up the mediocre work.

During the last interminable set of participation awards (which no joke lasted until 9:30 at night) I had to do something inside my head to entertain myself since I couldn’t clap every ninety seconds and play Candy Crush at the same time.  So, in my head, I made the following Bingo chart, which you should feel free to print out and use the next time you have to go to one of these things.

It isn’t in and of itself funny (and I always try to be funny) but it can be if you read between the lines.  “Most Enthusiastic Talker” is clearly the “won’t shut up for 10 seconds” award. “Best Storyteller” wouldn’t know the truth if it hit her in the face with a frying pan.  “Best Sense of Direction” is the kid who can actually find his way back from the bathroom.  Then, of course, there’s the ubiquitous fall back, “She’s so sweet!” And so on. You know the teachers would rather give awards like, “Most likely to throw a punch” or “Most likely to end up in prison” but they can’t, so they do what they can while remaining professional.

What awards would you give?  What do you think they really mean?  Tell me in the comments below. 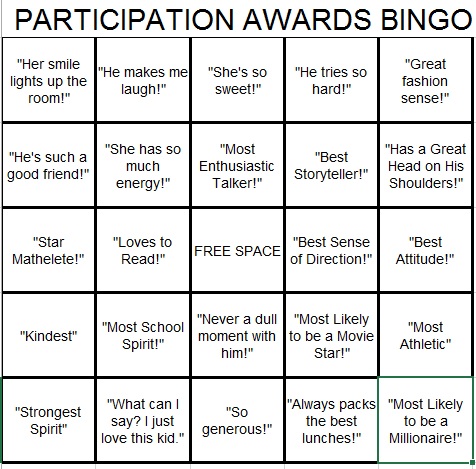 If you enjoyed this and want to read more like it, visit Lori  on Twitter, or on Facebook. For the Best of Lori, read her books, “Mismatched Shoes and Upside Down Pizza,” “The Armadillo, the Pickaxe, and the Laundry Basket,” and her latest release, the eLit Gold Medal Winning “You Know I Love You Because You’re Still Alive.”