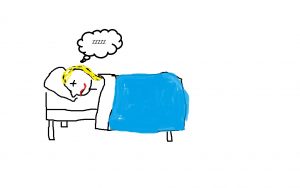 It’s summer, summer being defined as “that period of time in which you don’t have to get up and go to school,” and that conjures up a lot of images.  Long, lazy days in the sun; books to be read; frozen drinks; swimming; and all manner of recreational activities.

Except for us working folks, for whom summer mostly means that it is hot out and I will sweat through my dress clothes even before the hot flashes begin mid-afternoon.  I guess there is also less traffic during school hours.

This morning was a typical summer morning in the Duff household.  When I left the house at a relatively late 8:30am (much better than the school year 6:45am) I was the only vertical member of my family.  With two kids and a retired husband sharing my house, no one else need put on pants before noon.  Sometimes after that.

I understand that my husband is older than me, and when he was my age he was still working, so theoretically I don’t begrudge him his ability to sleep in as long as he likes.  He paid his dues, working thirty years in public safety for DeKalb County.

Intellectually, I know that.

However, when I am slapping the snooze button for the third time, and I see him lying there all peaceful like and making those snuffling noises I used to think were cute, I want to brain him with a shovel.  When I leave the house and all three of the rest of them are still dreaming tangerine dreams of marmalade skies, I want to clang frying pans together and march up and down the hallway.  If I have to get up and face the day, so does everyone else.

But I don’t, because I’m a grownup, no matter what my inner whack-job fantasizes about.  I do want the people I love to be happy, and they look happy, snug in their beds, the little….[and here I would insert a bad word which, literally translated, would cast aspersions upon their parentage, and since I am 50% of the parentage of 2/3 of them, I probably ought not.]

Jealousy is an ugly emotion, made uglier when it is irrational.  Mine is only partially irrational, as any rational person would be jealous of those with no particular plans for a blue sky summer day when that rational person had to go to work to deal with the intensive drama of other people’s lives.

But I was there, then, and I will be there, one day.  I don’t want to be older, as I have to be before I retire – my odometer is spinning faster and faster these days, which is good, because the spinning wheels create a little breeze which helps cool me down some in these hot days.  But pretty soon (it feels like) I won’t have any more miles left.  I’m not rushing that.  And you couldn’t pay me to go back to middle school.  Or high school for that matter.  I don’t want to be that girl, that intense ball of insecurity and uncertainty.  It took me decades to be comfortable in my own skin, and now that I am, I don’t want to go back to the days where I was my own harshest critic.  I’ve never met anyone who wishes they were 13 again.

So I guess I’ll go to work.  Be thankful I have a job to grumble about getting up for, and be thankful I’m no longer living in the soup of hormones that is middle school and that I (statistically speaking) have so many years of my life left to live.

So I’ll let my babies sleep in.  They need to rest up.  Their Wednesday will come.

The Wednesday of My Life

The Wednesday of My Life