‘Tis the beginning of the school year, and, ergo, ‘tis the time of year in which teenagers all around the world get huffy about their schools’ dress codes.  The teenagers in my house are no exception.

I take that back.  My teenage son doesn’t much care, since it doesn’t really affect him.  Boy fashion is what boy fashion has been for decades.  T-shirts, hoodies, or polos, jeans or knee length shorts.  Other than the prohibition against offensive slogans on t-shirts, anything a boy wears that wouldn’t comply with the dress code would also set that boy up for a butt whupping by the cooler boys.  That’s just a fact.

Girls, however, have to choose between what is presented to them in stores, on television, and in fashion magazines, and what is dress-code appropriate.   The rationale behind this is to avoid distracting clothing, as distracting clothing would interfere with the learning process.

Don’t get me wrong.  I am NOT anti-dress code. I have exactly zero interest in allowing my daughter to go to school dressed like a hootchie.  I appreciate the school creating a rule to back me up there. I think schools should prevent kids from wearing micro-minis, from wearing marijuana leaf t-shirts, and from wearing visible nipple rings.

But, see, I’m a lawyer, which makes me look at the letter at the law as much as if not more than the practical application of the law.  And I looked at the dress code, and I looked at my closet, and I realized that most of what I wear violates the letter of the dress code.  I am (obviously) not fashion forward. No one in the history of the world has ever said a sentence resembling “Wow.  That Lori Duff sure has style.  I want to look just like her.”  But nothing I wear is horrible or offensive.  I was under the impression that I dressed somewhat conservatively.  Apparently not.

I mean, take a look at these scandalous outfits: 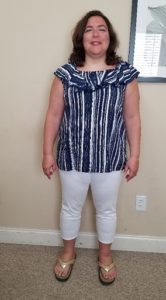 This one fails for two reasons.  One, because the pants are, technically, “jeggings.”  Two, because the shirt does not have sleeves, per se, just a ruffly collar.

And how about this bit of distraction: 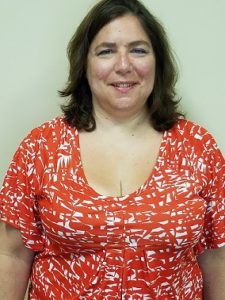 Ack!  Gross!  Cleavage!  How could anyone learn math if I were in the room?

This next one is a triple whammy.

As you can see from the index card taped to my knee, the skirt is a leeeeetle short for dress code rules.  Also, the skirt is made of a stretchy spandex material, which is another no-no.  You can’t really see in this picture because of the angle, but I promise there is more of that can’t-learn-fractions-because-some-cleavage-is-showing violation.  Really, for us bigger girls, it’s kind of hard to find non-turtle necks that don’t show some form of cleavage.

And, finally, we have this offensive puppy:

I know, I know.  You would never let your daughter wear such clothing.  Oh wait, that’s not right. Your daughter has no interest in wearing such clothing.  As far as the rules go, aside from the fact that it is potentially shapeless and unattractive (but comfortable, and at my age, I care about that more), I’m betting you can’t figure out what is wrong with it.  Well, the rules specifically state that pants must be “fitting at the inseam.”  These pants do not fit at my inseam, they hang a good 4-5 inches below.  Also, you can’t really tell from the picture, but there are lacy bits on top of the shoulders which are “see through” and you can see tiny dots of my shoulder flesh.

Ok, I get that the inseam rule is to prevent those tragically baggy and low-riding pants young men can wear.  The regulations in general want to avoid form fitting clothing and unnecessary exposure of the body parts generally thought of as “private parts.”  I have no problem with those goals.  I highly doubt that if I were 15 and showed up wearing what is pictured in this article that anyone would send me home or even give me a warning.  But they could.  The fact that a law isn’t enforced or isn’t enforced evenly (Ahem – I’m talking specifically about the cheerleader’s uniforms worn on game days and for pep rallies….) is just a recipe for trouble.  Discretion and independent thoughts are good things, but deciding who has to follow the rules and who doesn’t is a recipe for a discrimination claim.

I don’t know how you’d write a dress code that made sense.  I know what kind of spandex skirt they are talking about when they forbid them, and it isn’t the kind I was wearing.

The easy answer is uniforms.  They’re great equalizers – everyone looks equally terrible in them, and they leave no room for interpretation.  If everyone has the same khakis and polo shirts, then no one gets made fun of for their clothing choices and the kids with money don’t get an EZ-pass to popularity in the way kids who can’t afford name brands (or have no fashion sense) won’t.   Kids will always find a way for self-expression in hair styles and jewelry and doodles in Sharpie on their hands.

In the meantime, I will spend countless frustrating hours with my daughter, roaming the aisles of major and minor department stores, trying desperately to find that unicorn of a piece of clothing – the thing that she will wear and that she can wear.  Wish me luck.

Honestly, I’d rather go bathing suit shopping in a public co-ed dressing room while bloated.  It’s that much fun.

If you enjoyed this and want to read more like it, visit Lori on Twitter, or on Facebook. For the Best of Lori, read her books, “Mismatched Shoes and Upside Down Pizza,” “The Armadillo, the Pickaxe, and the Laundry Basket,” and her latest release, the 2017 eLit Gold Medal winner for humor, “You Know I Love You Because You’re Still Alive.”