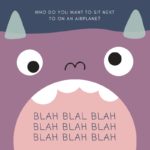 I boarded the plane with the dread I always feel when required to sit next to strangers.  Who will be next to me?  Do they have the same hygiene standards as me?  Do they have the same sense of personal space?  Are they talkers?  Not a fan of talkers.  I’m on this plane to get from point A to point B, not to make friends.  The journey part of travel is an excellent time for me to read, play Candy Crush, and generally sink into my own head and think my own thoughts in one of those rare times and places where no one expects me to do anything useful.

I was in Row 36, which is only two rows in front of “baggage.”  It was close enough to the rear bathrooms to hear people flush.  I was in Seat D, an aisle seat.  Boarding the plane, I looked down the rows of seats, I made a note and a prayer over who looked like a good companion.

I got to my row.  Sitting against the window was a woman who, if you were to describe her, you’d describe her more or less like me.  Fortyish Caucasian female, average height, not petite, obviously middle-class, brown hair.  She was playing with her phone, and didn’t much more than look up at me as I sat down.  I did not take this to be unfriendly.  She was doing her thing.  She didn’t need to start a conversation with a perfect stranger.  I was, frankly, relieved.

We were lucky, in that no one sat between us.  She remarked on this after take off, and we had a short, light, and pleasant conversation about how not being crammed up next to a stranger was akin to winning the lottery.  Then we went back to our own thing.  I thought to myself, this woman seems an awful lot like me.  I’ll bet if I knew her, we’d be friends.  But, because we’d be friends, neither one of us is going to engage in small talk just to fill the silence.  Silence is fine with us.  This is why we’d be friends, and while we will never be friends.  Philosophical musings completed, I went back to my book.

In the row directly in front of us was a fiftyish man with grey hair and a young woman with dark hair.  I couldn’t see their faces.  The man was a talker.  He asked the young woman where she was, and where she was going, and then told her all about restaurants in both places.  And that was the last he pretended to care about her.  He had one of those voices that carry.  One of those voices that is great for speaking to crowds, but sounds like a rip saw biting its way through the delicate bones in your ear canal when you are too close to it.

We were too close to it.

I assumed he’d eventually stop talking.  I was wrong.  I learned quite a bit about him.  He was a massage therapist, having gone to school for nine months, which he knows doesn’t sound like much but it was nine months five days a week.  He was, to hear him tell it, the most talented massage therapist on the planet.  He knew athletes that would only let him work on them because he was the only one who could.  He was keen on alternative medicine, because he couldn’t wait for science to catch up with what biology already knew.*  Apple cider vinegar is the elixir of life.  Unless you are already too acidic, in which case it will kill you.

I really tried hard to catch someone’s eye, but was unable.  The me-like lady next to me was sleeping, or at least pretending to.  I don’t know how she did it.  The man in front of him, who was wearing a Cubs jersey and ball cap (this was a flight to Chicago) and was easily 6 foot something and looked like his name was Francis Xavier McDonaghy (Frank to his friends – Frankie to those he grew up with but ONLY those he grew up with – I think it is safe to assume he’s a cop, not to stereotype, but well, you just see if I’m wrong) kept turning his head almost all the way around and giving a death glare, but I never caught his eye.

I tried to read, tried to write, but it was hard.  Between the minor turbulence and the major voice singing its own praises loudly enough to fill an opera hall, I couldn’t concentrate.

Finally, we landed.  My seat made woke up, and I put my hand on her arm.  She looked at me, somewhat alarmed and the unbidden contact.

“Thank you,” I said, as quietly as I could while still being heard.  “Thank you for not spending two hours telling me how wonderful you are.”

She opened her mouth wide and let out a loud laugh.  (See?  I knew I’d like her.)  “That was amazing.  I’ll bet you didn’t know you got a degree certificate at the end of this lecture, I mean, flight.”

We laughed, trying, but not really succeeding, in being quiet.  We joked together.  “I feel like we should have a row of shot glasses,” I said.

“Apple cider vinegar — shot!” We said at the same time.

Frank turned his head again and I caught his eye.  He gave me the wide-eyed universal sign for, “Can you believe this guy?”

Together my spiritual doppelganger and I speculated about whether or not the poor young lady sitting next to him was merely way more polite than either of us were capable of or actually interested in a two hour lecture about how much her seatmate knew more than anyone about everything.

Finally, people started deplaning.    Despite the fact that Mr. Talky and his poor trapped companion were in front of us, Mr. Talky didn’t let up enough for Ms. Polite to pack up her stuff and make a getaway, so we left them behind, his voice propelling us forward.

When we got to the first class curtain, my seatmate and I nearly collapsed with laughter.  Not Frank.  He was actively mad.  When we got on the jet way, I said, “I’m pretty sure the airline owes us a drink.”

“Drink, hell,” said Frank, in a tone that cemented my thought that if this same scenario had taken place in a bar or restaurant Frank probably would have thrown a punch or at least dropped an f-bomb.  “They owe us a free flight.”

My new friend had to skitter off to her connecting flight, and I had to go to mine.  I caught up with her again on the moving sidewalk, and snuck up behind her.  I leaned forward and said, “Physiology.”  She jumped a little.

See?  Even unfriendly people like me can make friends on airplanes.

If you enjoyed this and want to read more like it, visit Lori on Twitter, or on Facebook. For the Best of Lori, read her books, “Mismatched Shoes and Upside Down Pizza,” “The Armadillo, the Pickaxe, and the Laundry Basket,” and her latest release, the eLit award Gold Medal Winner “You Know I Love You Because You’re Still Alive.”