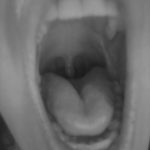 It isn’t terribly pleasant when a doctor has me open up my mouth and say ahh so she can get a peek at my throat.  I have a tendency to gag on the tongue depressor, and I find myself worrying about the quality of my breath.  But I’m not embarrassed.  There’s nothing humiliating or even humbling about the tissue in the back of my throat which starts the journey of food through my system.  It’s just your basic throat, the opening of a long tube, and if you want to look, it’s on you.

The other end of the tube, though, is a completely different story.

My father is on the (relatively) good end of his battle with colon cancer and my mother suffers from Crohn’s disease.  So I have a pretty close family history of issues with the nether end of the alimentary canal.  I’m not yet fifty, so I’m not yet the standard age to get a colonoscopy, but generalized paranoia and a legitimate fear of dying made me seek one out.

Which all sounds great on paper, but it requires me to bare my bottom to a relative stranger and allow her a peek inside.  With a nurse as a witness, of course, because lawyers require that people touching the intimate parts of other people for totally legitimate reasons be chaperoned to ensure the legitimacy of the reasons.

I know, intellectually, that these people look at hineys for a living.  Mine is perfectly functional, thankyouverymuch, but it would take an entire atmosphere’s worth of air brushing to make it of the sort that you might see highlighted on the cover of a magazine at the supermarket check out counter.  Still, given the wide range of posteriors that these professionals see on a daily basis, mine is probably no worse than average.  I’m assuming they aren’t judging.

That doesn’t make it less embarrassing.  Now that I am old enough (and young enough) not to wear diapers, the number of people who get a gander at the secrets told in that part of my body in broad daylight are, usually, approximately zero.  At the gastroenterologist’s office, however, there are a team of professionals using a searchlight.

For the actual event, in which a camera with a wide angled lens explores deeper than the Mariana Trench, you have to first do the world famous prep.  The prep involves drinking a gallon or more of a solution that tastes like lemon-flavored goat urine, and then expelling it at great force, along with meals you haven’t even eaten yet.  Thus cleansed, you go to the ‘we’re going to kick you out more or less immediately’ section of the hospital, and wait for the sedatives.

They don’t knock you out all the way, but they do give you enough happy drugs that you don’t much care about the details, and remember nothing.  They snake a camera seventeen miles into your body through the back end, taking pictures along the way.

When I was done, and more or less lucid, they told me that I was fine, and handed me copies of the pictures, I guess in case I wanted to hang them on the refrigerator along with my kids’ school pictures and coupons for buy one get one free donuts.

It’s a humbling process, though it only is because we’ve made it so as a cultural value.  As a practical matter, there isn’t much different about the different ends of our digestive tract except that we’ve collectively decided that one can be seen in polite society and the other can’t.  More to the point, exposing one in, say, a grocery store, won’t even get you a sideways glance, and exposing the other will get you arrested and forbid you from being within 100 yards of a school.  It doesn’t have to make logical sense – it’s a visceral feeling that we all get.  I don’t really mind seeing inside your mouth.  I do mind seeing the other.

I’m glad, though, that there are highly educated professionals who don’t mind seeing the other, and who are willing to poke and prod and make sure that there isn’t anything in there that might kill me.  And I hope that everyone else is willing to forego embarrassment and let those professionals get a gander when it is time to do so.  I’d rather be a little embarrassed than dead.