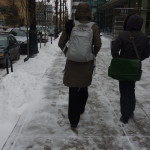 I’m not sure when exactly I got old enough to begin every third sentence with “when I was a kid” but seriously, folks, when I was a kid, things were different. I could go on and on about technology, and how I had to type out my college papers on a typewriter and then retype them after edits were made, but I won’t. I won’t talk about busy signals on phones or even the concept of a ‘long distance call.’ I won’t mention the three television channels, and the rabbit ear antennas with the foil balls on the top of them, or the weird yoga poses you had to maintain in order to get a consistent signal.

Nope, I’m talking about the ability to put one foot in front of the other and travel more than 50 feet without whining.

We went to Chicago back in October for my cousin’s wedding. I was excited to take the Dufflets to a big city, and to show them what sort of freedom they would have if they could just walk a few blocks to an overpriced coffee shop instead of having to beg for a ride there. They liked that part. But when I suggested (and insisted upon and actually executed) a mile and a half walk to our destination upon sidewalks designated for that purpose and with lots to see and do (and eat) along the way, there were more tears than on the actual Trail of Tears. Ok, maybe not literally, but there was more whining.

I have to say that this whining is kind of state sanctioned. Over a decade ago, when I had to commute into Decatur every morning, I often got stuck behind a particular school bus which stopped three times in about 100 yards. You could see the first bus stop from the third bus stop. The kids looked to be high school aged to me – they weren’t five year olds. I thought that was the beginning of the end of society as I knew it, and I might have been right. It was explained to me that since the road was a big one (it was) and since there were side streets that had to be crossed, that for liability purposes they had to make the three stops. I did not mention (ok maybe I did) that perhaps when I was in fifth grade I had to cross a six lane divided highway without adult supervision in order to get to school because my house was within the mile and a half limit where the bus wouldn’t get you. But still, this is the age of lawyers, and liability law suits, so, whatever.

This year, however, I regularly get stuck behind a bus that is even worse. This is a middle school bus, which means that the youngest person on it is about 11. The first time I got trapped by the incessant stopping I almost stroked out. It stopped at a driveway. Kids got off. Then it stopped at the next driveway, which was not twenty feet away from the first. More kids got off. Then it stopped at a third driveway, another thirty feet down the road. It skipped a driveway, then stopped at a fourth. I sat behind the bus, (im)patiently waiting, lawfully obeying the stop sign arms, sucking in diesel exhaust fumes for probably ten minutes. If my blood pressure could have been harnessed, I could have powered a small city for an afternoon.

I mean, SERIOUSLY. These were not baby children. I will grant you there were no sidewalks, but the only lawn that needed to be crossed was their own. There were no streets to be crossed. The road itself was small, and barely wide enough for two lanes of traffic. This is INSANE. I mean, completely, absolutely, and without reservation INSANE. Back in my day (insert shaking fist and clicking dentures here) my high school bus had ONE BUS STOP. We all crossed streets, walked, trudged through snow and sub-freezing temperatures (in the dark) in the winter, to all congregate in one place so the bus only had to stop once.

Conventional wisdom is that millennials are the entitled generation, spoiled rotten and expecting the world to make things easy for them. Well, why wouldn‘t they think that? Haven’t we taught them that? Everything is instant and on demand, and they don’t even have to walk next door to get to the bus.

When I was a kid? We would have insisted on walking up hill. Both ways. In the snow. Just for the sport of it.

Uphill in the Snow. Both Ways.

Uphill in the Snow. Both Ways.