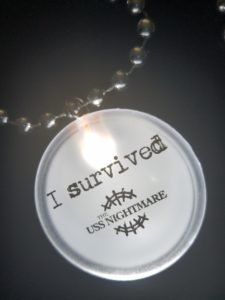 I’m not a huge fan of scary things.  Probably because my day to day life is scary enough.  As a lawyer, I’m one of the first people that gets a call when someone dies, I’m in the room when people are told they are never going to see their children again, and I am often the first person to whom someone says out loud in a simple, declarative sentence, “I want to get divorced.”  So, recreational stress and heart palpitations are not my thing.  I’m overloaded from 9-5 and beyond with anxiety and freakage.  No need to add that to the social menu.

My son’s birthday was coming up and, when asked what he wanted to do to mark his 17th trip around the sun, he said he wanted the family to go to Netherworld with him.  Netherworld is a haunted house.  Halloween is Jacob’s favorite holiday, and his birthday is October 23rd, so they are coincidentally close together.  I have never been to Netherworld, but it is not far from our house, and regularly makes the “Top 10 Haunted Houses in the U.S.” lists.  When he announced this desire, all my innards twisted and groaned.  I don’t know which appealed to me less – the haunted house-ness of it itself, or the thought of rallying my family of four to all get dressed and get in the car and stand in line and participate in an activity at the same time.

The week before his birthday, he and I went on a whirlwind college tour during fall break.  While we were in Cincinnati, he discovered that the U.S.S. Nightmare, a haunted house on a ship, was located on the Ohio River, just a few short blocks from our hotel.  He talked me and my reluctant friend Teri into the R.I.P tour.  Teri is also a writer.  Teri and I figured, “It’s all material.”  We also figured if we wrote about it we could deduct the price of admission on our taxes.  We promised to hold hands the entire time.

Because we got the R.I.P. tour and not the regular tour for wimps, we were given blinky necklaces to distinguish us from the rabble.  Also, unbeknownst to us when we paid our admission, the blinky necklaces let the actors within know that they could touch us.  I was not a huge fan of that.  But I tolerated it more than Teri, who pretty much kept a running mantra throughout the tour of, “Don’ttouchmedon’ttouchmedon’ttouchme.”

I’m not scared of the creepy stuff because I know it isn’t real.  Fake gore is just plastic or rubber.  Stories are just made up tales.  I am, however, easily startled.  I jump and screech and then once my heart goes back into rhythm and I realize it’s just an underemployed 20 something wearing theater makeup who has just grabbed my arm I laugh like an insane clown until the adrenaline subsides.  I laughed in the same way when Jacob or Teri jumped and screeched.  It didn’t matter.  I ended up leading the procession because of my abject inability to suspend my disbelief that we weren’t actually on a haunted ship.  Which I was sort of sad about, because I think my life would be better in general if I were more able to slip inside of fantasy.

For the most part, the creepers left me alone, probably because I looked them directly in the eye.  One guy grabbed me by the arm and told me he was going to cut off my leg.  I told him to take the left one because it had a tendency to swell.  He wasn’t really sure what to do with that one, so he pretended to saw it off for a moment before moving on to a more pliant victim.

One room smelled, more or less, like the New York City subway system as I remember it from the 1980s.  Jacob asked me how they got that smell in there, since he doubted there was a Yankee Candle with that scent.  I said they probably peed in a bucket and left it there for a week or so.  He doubted it, but I wasn’t kidding.

There were plenty of cool effects with smoke and lasers, and shot glasses with blood (or, as I like to call them, Virgin Bloody Marys) that we were pressed to drink.  Teri refused.  I drank them mainly because I was thirsty.

But I’m still not going to Netherworld with my whole family.  Rounding us all up for a family activity?  Now that’s a different kind of scary.