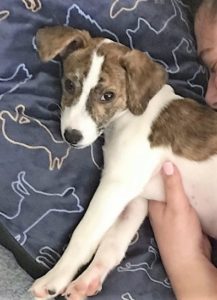 As you will recall from last week’s column, I left my husband alone for ten minutes at a street fair in South Carolina, 200 miles away from our home, and instead of buying a jar of local honey or an antique saw blade painted with local scenes like a normal person at a craft fair, he adopted a puppy from the local animal shelter’s booth.   The puppy was a tiny thing, making pitiful whiny noises and shaking.  The papers he came with said he was six and a half pounds, a beagle-and-who-knows-what mix, about 3 months old, and his name was “Pecan.”  Pecan was a decent enough name for him.  He was mostly white, with brown brindle patches that looked an awful lot like a pecan shell.  My children instantly rejected the name Pecan, largely because no one would ever agree on whether or not it was pronounced PEEcan or peKAHN.

For a brief, shining moment I still held veto power, though I knew I would not exercise it.  I was silent instead, running through the practical realities of the situation. We were stuck in a hotel room for the next 24 hours, one that was decidedly not pet friendly.  We didn’t so much as have a bowl to put water in.  We had a wedding to go to and a 4 hour car trip home.

My daughter asked the shelter worker if she could hold him, which I thought was a little ironic given that he was now our dog.  After some brief tutoring on supporting his bottom, the shivering, crying pup was transferred into Marin’s arms.

And with that, after nothing more than the show of a driver’s license and the passing over of a twenty dollar bill, we were dog owners.  We took turns carrying him back to the hotel where the van was parked.  Something about him attracted the notice of everyone we walked by, which was a lot of everyones, given that it was a street fair.  Everyone wanted to pet his head.  They asked his name.  We said, “We don’t know yet.  He’s been our dog for ten minutes.”

My husband said, “I didn’t pick him.  He picked me.  He needed me.”  I could see that.  The dog who was not named Pecan was clearly cold and scared and overwhelmed.  He didn’t try to get out of our arms; rather, he snuggled in as close as he could to the warmth and safety.

We found a pet store only 3 miles from the hotel and went directly to our minivan and then to the store.  We bought one of everything, except the things we bought two of.  Our $20.00 shelter rescue dog was now a $200.00 dog. We explained our dilemma to the cashier, who gave us a big cardboard box to hide him in.  By this time, Not Pecan had stopped shivering and crying.  He may have even started to like us.  When we stuck his new fluffy bed in the bottom of the box and closed him in the box to sneak him into the hotel, he didn’t complain at all.

We lined the hotel room with wee wee pads and towels.  We put water and puppy food in bowls and eventually it was drunk and eaten.  Jacob, who had dosed himself up with Benadryl at the first sign of an itchy nose, volunteered in an antihistamine haze to stay back from the wedding to make sure the nameless dog didn’t tear up the hotel room or bark or howl.

He was a good dog.  He didn’t tear anything up, though he did pee a lot more than you’d expect a critter the size of a loaf of bread to be able to pee.  He never once barked or howled.  By the time we went to bed that night he was our friend, wagging his tail and snuggling us and going out of his way to be cute to endear himself to us despite the piles of doody he left in strategically inconvenient places.

We tried out different names, and none of them stuck.  We tried ironic names like “Spike” and “Killer.”  We tried overdone ones like “Muffin” and “Buddy.”  The next morning, he looked me in the eye and I swore he looked at me and ‘told’ me his name was “Sam.”  I liked it, and so did my daughter.  We tried it out.  “Sammy?  Sammy?  Is that your name?”  We thought so.  My husband vetoed it, right as he found a newly deposited bit of business near the door, next to but not quite on the wee wee pad we had laid out for that purpose.

“His name ought to be Lincoln,” he said, “Because of the Lincoln logs he keeps leaving all over this hotel room.”

“Lincoln,” I said, and the puppy looked up at me.

“Linc!”  Said Mike.  “Stinky Linky!”  He said, picking up the Lincoln log with the wee wee pad and depositing it in the toilet.  “I like it.”

And so, our family of four is now a family of five.  We all love him and couldn’t imagine life without him, and we wonder why it took us this long to get a dog.  We figure it was because Lincoln wasn’t born until now and he was the only dog for us.

But I’m still never leaving my husband alone at a craft fair ever again.

If you enjoyed this and want to read more like it, visit Lori on Twitter or on Facebook. Lori is a National Society of Newspaper Columnists 2018 Columnist winner, and a New Apple, Readers’ Favorite, and eLit award winner for her latest release, “You Know I Love You Because You’re Still Alive.”  She is also the author of the bestselling books “Mismatched Shoes and Upside Down Pizza,” and “The Armadillo, the Pickaxe, and the Laundry Basket.”

I Left You Alone for Ten Minutes Part 2

I Left You Alone for Ten Minutes Part 2