I didn’t grow up with pets.  My father has a basic contempt for any critter that doesn’t have the sense to be born a human being.  My mother teeters between being afraid of anything with pointy teeth and being grossed out by anything with an exposed anus.  Our pets were limited to birds in cages and fish in tanks, none of which we actually touched, and so we n 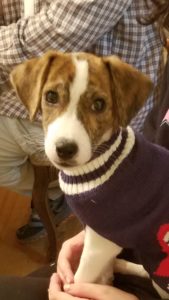 ever got especially attached to any of them.

As an adult, I decided to ‘rebel’ and get a cat.  I chose a black adult male cat from the DeKalb County animal shelter.  He came with the name Percy, and it suited him so I kept it.  I should say, he chose me.  I walked into the room full of cats, all sitting in their individual carriers and thought, “How on Earth am I supposed to choose?” and then Percy stuck out his paw at me.  I opened the latch to his carrier, took him out, and he hugged me around the neck.  That was that.

When my son was born many years later, it turned out that Jacob was severely allergic to Percy.  Percy was relegated to the basement.  I made a point of spending quality time in the basement each day with Percy, but it wasn’t the same, and when Percy passed away from kidney failure a few short years later, we didn’t get another pet.

Not that my kids didn’t want one.  Oh, how they begged.  A cat was out of the question due to the aforementioned severe allergies.  A dog, I thought, was too much work.  I already cleaned up after the literal and metaphorical poop of enough mammals.  I didn’t need another.  As the children got older and more responsible, my arguments got less and less sound, since I knew they can and would take care of a dog.

Finally, I found myself in the pro-dog camp.  This was because my retired husband spent hours each day playing Empires and Allies on his phone, and I decided that a dog would force him to get off the sofa and make him take a walk and interact with a live being.  It might also give him someone (something?) to talk to that wasn’t me.  I was a fan of the concept.

He was solidly in the no way no how camp, as I myself had been not too long before.  Of course, I had some parameters.  I wanted an adult dog, already housebroken and with its adult personality already established.  I wanted a hypoallergenic breed.  I preferred a rescue or a pound dog.  I didn’t want a dog that was too high maintenance or too high energy.  I didn’t want a shedder.  I figured that by the time we found one that fit my exacting standards I could talk him into it.

A few weeks ago, we went to my nephew’s wedding in Columbia, South Carolina and stayed at the Schmancy Hotel preferred by the wedding party.  We had a few hours to kill on the day of the wedding and went walking around.  It was a pretty, if chilly, day, and it was a funky collegiate town, the capital of South Carolina. There was a lot to see and do.  We stumbled upon a small street fair, about two long city blocks in length, and dashed into it.  We dove into the food trucks, bought cutesy handmade crafts, and generally enjoyed the morning before the wedding.  As is typical for a family of four in a crowd, we often lost track of each other, but didn’t much worry about it because it wasn’t a large street fair, and we are all old enough to take care of ourselves with cell phones in a controlled environment.

It was about time to start to head back to the hotel to get ready.  I found everyone and we started to walk back.  Eventually we realized that my husband was missing.  At the big intersection in the middle of the fair, we stopped and tried to find him.  He’s usually easy to find in a crowd, because he’s tall and has a shock of thick, curly silver hair.  We couldn’t find him.  Then Jacob’s phone rang.  He answered it.  I heard, “Uh huh…uh huh…You what?  You adopted a dog?”  My daughter took off like she’d been shot out of a cannon in the direction from which we had come.

Jacob hung up and we looked at each other.  We made our way back and found the county animal shelter booth and found my husband, signing papers and my daughter crying lottery-winning tears, asking if she could hold the dog.  It was a small, brown and white pup, crying and shivering miserably in the shelter worker’s arms.

“I left you alone for ten minutes,” I said.

If you enjoyed this and want to read more like it, visit Lori on Twitter, or on Facebook. Lori is a National Society of Newspaper Columnists 2018 Columnist winner, and a New Apple, Readers’ Favorite, and eLit award winner for her latest release, “You Know I Love You Because You’re Still Alive.”  She is also the author of the bestselling books “Mismatched Shoes and Upside Down Pizza,” and “The Armadillo, the Pickaxe, and the Laundry Basket.”

I Left You Alone for Ten Minutes

I Left You Alone for Ten Minutes