Why take a tour when you can take a ghost tour?

I found myself in Savannah, GA for a work conference and, because this sort of thing is what passes for a vacation for my family, I dragged them all along.  They entertained themselves during the day while I was being educated but at night we were on our own.   My daughter, who has always been fascinated with all things creepy, wanted to go on a ghost tour of what touts itself as America’s Most Haunted City.

I didn’t especially want to go.  I tend to be grounded in the ordinary and mundane.  There isn’t much magical or mystical about me.  As much as I want to think I’d be a welcome addition to Ravenclaw, I am a pure-bred Muggle.  I’d like to believe in things I can’t see or feel, but I don’t.  Still, Marin was excited for it.  “I want to be so scared that I cry,” she said.  So I went along, and vowed not to roll my eyes or generally interfere with her ability to believe in fairies and enjoy the evening.  Plus it was a nice night and I wanted to walk off the enormous amount of food I’d eaten.   We left the boys in the hotel room and set out.

Marin is 13, and therefore bounces back and forth between thinking that the sole purpose of my very existence is specifically designed to make her life miserable and that the sole purpose of my existence is to use my credit card to buy her stuff.  Sometimes I’m also available to provide transportation.  Ha ha.  Just kidding.  Sort of.  Anyway, the point is that even though I suspect she was only willing to go with me because I had a credit card and access to transportation, I was thrilled with the prospect of an evening with my daughter where she might actually talk to me.

We got to the appointed starting place and stood around waiting for it to start.  Everyone was uncomfortably hot looking.  Savannah is known for many wonderful things, but no one calls it by its true moniker: The Sweatiest City in the Southeast.

We were given little devices that looked to me like stud finders.  Allegedly, if you pushed the button and the light turned green, there was a spirit in the area.  My daughter pointed it at me and it shone a bright green.  “What’s up with that?” she asked.

“I’m dead on the inside,” I said, and having gained a tiny crumb of her respect by making an angsty teenage joke at an appropriate moment, we decided to have fun.

We learned a lot about architecture and cotton and the slave trade, much to my daughter’s chagrin.  “I mean,” she said, “This is interesting and all, but I came here to be scared, not informed.”  Nonetheless, the stories about cotton and especially the slave trade involved a lot of deaths, many of which took place on the ground upon which we stood.  Sometimes, the bodies were still beneath our feet.

We were invited to take pictures of the house Juliette Gordon Low’s grandparents used to own, and told that sometimes ghostly images of a little girl who died on the second floor could be seen in a photograph.  Supposedly, the construction folks working on restoring the building regularly get freaked out because they find baby dolls on the second floor, even when the room was empty minutes before.  Here’s my picture.  Judge for yourself. 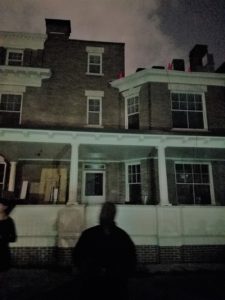 There are graves and monuments everywhere.  Some are your basic historical site, some have legends, and some have odd grave markers listing the cause of death.  Like this one: 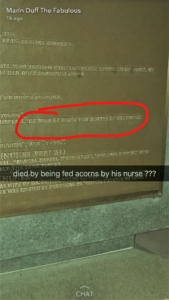 I’m not saying it isn’t possible that my nurse will one day feed me acorns and I will die of them. If this is the case, I hope my family will feel that my death deserves some dignity and not put that on my tombstone so that tour guides can point at it to make people laugh.  Although, now that I think about it, I hope they do that whether or not I die of acorns.

I don’t know that I saw anything supernatural on our ghost tour.  But I thought a lot about the dead, some specifically by name, and imagined their deaths.  That, I suppose, is bringing them back to life for a moment in its own right.  Maybe I did conjure up some spirits on the ghost tour.

In any event, I ain’t afraid of no ghosts.

If you enjoyed this and want to read more like it, visit Lori on Twitter or on Facebook. For the Best of Lori, read her books, “Mismatched Shoes and Upside Down Pizza,” “The Armadillo, the Pickaxe, and the Laundry Basket,” and her latest release, the 2017 eLit Gold Medal winner for humor, “You Know I Love You Because You’re Still Alive.”