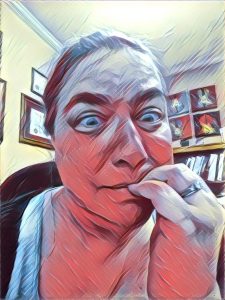 My Dad is in the hospital. This, naturally, is cause for alarm, and I worry. My parents live 600 miles away from me, so it isn’t so easy for me to just go and check as often as I’d like. The older my parents get, the more I fret about each thing that occurs. Every day that passes makes it statistically more likely that this particular phone call might be the one I dread.

This one wasn’t, thank G-d. I couldn’t be sure, at first, because my parents are terrible when it comes to giving information. They despise talking about awful things so much that they simply don’t, the end result of which is that I often don’t know about major surgeries until after they have occurred or family deaths until long after a sympathy card, bouquet of flowers, or my presence at the funeral would have been appropriate. “What? I didn’t tell you?” my Mom will say in her Joe Pesci accent. “I thought I did.”

Anyway, this go round, I knew everything was going to be ok when my Mother’s tone of voice went from worried and panicky to her usual, that is, irritated at everything my Father does. “He wakes me up at four (fowah) in the morning (mowhnihn),” she says, pausing to take a drag on a cigarette, because of course she still smokes, post stroke and aortic stents. “He says, ‘I think I’m having a heart attack.’ So what would you do?”

At first I think it is a rhetorical question so I don’t answer, but her pause is long enough that I say, “I’d call 9-1-1.”

“Of course,” she says. “You’d call 9-1-1. So I pick up the phone and he tries to grab it from me. He tells me not to call 9-1-1, that I should just drive him. I’m not driving him. I’m calling 9-1-1. He’s such an idiot! I mean, the development paid for that whole fire station with the ambulances to be built right outside the entrance with our homeowners’ dues, and I’m calling 9-1-1.

“Hold on,” she says. “I think I just ran over something.”

“Mom! Are you driving while you are talking to me?”

“I was in the development the whole time. I promise. I just pulled in the garage.” She coughs, the wet, hacking cough of a lifetime smoker. “So we get in the emergency room, and they decide it isn’t a heart attack, it’s an afib, and they give him some medicine and he’s ok, but they don’t have a room for him. So every time I want to have a cigarette I have to check in and out of the ER, which is such a pain in the tuchus. I mean, I’m in and out four times already, you think the lady at the desk there doesn’t recognize me, I have to keep showing her my ID?

“I’m parked in the handicapped spot, which I think is so convenient because I don’t have to walk so far, but it is right next to where the security guard is parked. You can’t smoke anywhere on the hospital grounds, so he keeps yelling at me, and I keep telling me I’m in my own car with all the windows rolled up so what does he care? But he yells at me anyway.”

“You have the option of not smoking,” I say. She ignores me, just like I knew she would.

“So, I’m home now, and I’m going to bed. I’m taking two sleeping pills — don’t worry, the doctor said I could. But don’t call in the morning because I won’t get up until the afternoon. That’s what happens when I take two pills. Call your father in the morning. He’ll be bored and I won’t be there. He knows how to answer his cell phone. I don’t.”

That’s how I know he will be ok.

I called my Father in the morning, just like I was instructed to do. He sounded like himself, not particularly tired or sickly or weak. I said, “You have to quit doing this kind of thing to us, you know.”

He said, “Eh. What do you want from me?” and then the conversation moved to the how-are-the-kids-how-is-work variety. That’s what passes for a heart to heart in my family. We express love as a form of worry, and we tell each other not to worry because we don’t want to bother the people we care about. We don’t worry about things or people we don’t care about. We don’t get irked by things that don’t matter.

And my parents matter very much. That’s why I’m worried.

[Update: my Dad was released from the hospital and he will be ok for the moment. Phew!]

If you enjoyed this and want to read more like it, visit Lori at her website, www.loriduffwrites.com, on Twitter, or on Facebook. Lori is a New Apple, Readers’ Favorite, and eLit award winner for her latest release, “You Know I Love You Because Youï¿½re Still Alive.” She is also the author of the bestselling books “Mismatched Shoes and Upside Down Pizza,” and “The Armadillo, the Pickaxe, and the Laundry Basket.”

For the Love of Worry

For the Love of Worry