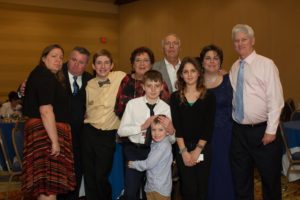 My parents, center back, and their brood

On April 6, 2018, just a few days from when I am typing this, my parents will have been married for fifty years. Yup, their golden anniversary has arrived.

There are a number of miracles at play here.

My parents did not have a particularly romantic beginning, though if you know them, you won’t be surprised.  They were friends from when they were children, and dated each others’ friends.  They never dated each other.  I’m serious.

In 1965 or so, my father had been drafted and was currently serving his tour in the U.S. Army.  He was extremely fortunate – his assignment was to be a Military Police Officer.  He went around New York State, his home ground, and chased AWOLs.  To make it better, he was put in charge of handing out weekend passes for his unit, and he managed to hand himself one most weekends.  So it was no big deal that he found himself at a Halloween party with his high school friends.

He had come in costume: according to legend he came in drag.  Some hours into the party he decided he was uncomfortable in makeup, and got his old friend Helen to help him take it off.  They went into the bathroom to find cotton balls and cold cream, and while in there, my mother announced to him that they were going to get married.

The exact words are lost to history, but it is clear that my father said something like, “Say what?”

“We’re getting married,” my mother said.  “I’ve decided it is time for me to get married, and I’ve decided you’ll be a good provider and it is going to be you.”

“It’s really not your decision.  I’m going to go out there and tell all our friends we are engaged.”

Over the years, they have both told that story consistently and in the same way, even if only one of them is in the room.  I have no reason to believe it isn’t true.  If you know my parents and their personalities, it makes perfect sense. And honestly?  There are worse reasons for choosing a mate than being friends forever.

And so they married in 1968, two days after Martin Luther King, Jr. was shot, at Temple Beth El in Long Beach, NY.  My mother’s bridesmaids wore yellow, as did mine thirty one years later. My father’s tuxedo pants were too short and he had a Band-aid on his thumb.  Two years after that, I was born, and three years after that my sister came along.

And here we are.  Fifty years later.  My father has had a triple bypass and colon cancer.  My mother has had a stroke and stents put in her heart.  They’ve lived together in five different states and had four grandchildren.

If you ask what their secret is for marital longevity, my father will say, “Marriages end in one of two ways: divorce or death.  Your mother and I have chosen death.”  If you press him further, he will say, “Communication is over-rated.  Your mother and I never talk, and look where we are.”  You can make a lot of good arguments against that one, but the proof, as they say, is in the pudding, and this particular pudding has some age on it.

If you ask my mother what the secret is, she’ll wave you off with her hand and make that scrunched up face she makes and say something like, “I don’t know.  Your father’s a schmuck.”

But she loves him.  You can tell by the angry way she worries about him and the way she aggressively plies him with milkshakes so he can keep his weight up during chemo.

I know how lucky I am to be pushing 50 myself and to not only have two living parents, but two living parents who still live independently with each other.  So, happy anniversary to my parents, Helen and Fred Brudner.  I love you dearly, separately and together.  I could do worse than to be you when I grow up.

If you enjoyed this and want to read more like it, visit Lori  on Twitter or on Facebook. Lori is a New Apple, Readers’ Favorite, and eLit award winner for her latest release, “You Know I Love You Because You’re Still Alive.”  She is also the author of the bestselling books “Mismatched Shoes and Upside Down Pizza,” and “The Armadillo, the Pickaxe, and the Laundry Basket.”