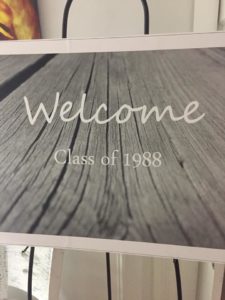 It had to be 1982, which would have made me 12, when my parents went off, perfumed, cologned, and dressed up, to their 20th high school reunion.  They came back later that evening in a gossipy post-mortem, all a-twtitter that some of their classmates had become grandparents.  The ones who had kids right out of high school, and whose children did the same were grandparents at 38 years old.  The whole concept stunned them.

I remember thinking, “What’s the big deal if people your age have grandchildren?  You’re OLD.”

I entered the room flanked by my hostess, Laura, who saved me the over-priced price of a hotel room.  I saw the sign announcing, “Welcome Class of ‘88” and immediately panicked in a way I haven’t since I entered the cafeteria back in the day.  “Let’s just go back to your house,” I said to Laura.  “We can check out the pictures on Facebook later.”  Laura laughed.  I guess she thought I was kidding.  I was, in a way.  I had paid $120 for the privilege of attending this event.  I was eating $120 worth of food and drinking $120 worth of alcohol if it killed me.  Which I immediately thought it might.

I grabbed something blue in a martini glass off the bar and wandered in, glad not just for the alcohol, but for something to hold in my hands.

There they all were.  Boys I had crushes on back in the day (no, I am not naming names, even this far removed.)  Girls who intimidated me.  People I knew I was friends with but couldn’t recall a single detail about.  People I couldn’t wait to talk to, and people I wanted to talk to but never got the chance to talk to.  Not a single person I was trying to avoid.

There was music in the background, all of which was familiar from the late 80s.  It was a little too loud, proof, perhaps, that I was at my 30th high school reunion and not my 10th.  I went up to the DJ at one point and said, “Look, I don’t want to be that girl, but the truth is that I’m trying to have conversations with people I haven’t talked to in 30 years, and I can’t hear a thing anyone is saying.”  He turned down the music a half a notch, then turned it right back up as soon as I walked away.  Oh well.  I tried.

I went back to the crowd, ready to get my shout on.  Despite the fact that we had to yell to be heard, I had some pretty good conversations.  Don’t get me wrong, there were plenty of the “where are you living now what do you do for a living are you married do you have kids” variety.  But there were also reflections on life, “remember when” stories, and a whole lot of people I talked to that made me nostalgic.

I had more than one conversation with more than one person in which we exchanged more meaningful information than we had in our entire childhoods.  Those people made me sad, because I felt like I had wasted so many years of not talking to people who it turns out I really liked when I had the chance to do it every single day.  Just because we sat at different metaphorical cafeteria tables.  Social strata fell away at the reunion, probably because we are all more comfortable in our own skins, and distance has rendered everyone familiar a product of the whole canvas of childhood instead of a separate part of it.  I had to wonder what my childhood would have been like if I hadn’t spent so much energy feeling socially awkward and wondering what the cool kids thought of me.   There’s just something inherently special about people who knew you during your acne ridden adolescence when you were still trying on personalities and philosophies that makes you want to talk to them, even if the thought of talking to them would have terrified you when you were 13.  Maybe it is because most of us have children of our own who are now the age we were then that we realize how ridiculous all that teenage drama is.

And not a single person talked about grandchildren, at least not in my presence.  Maybe we’re not that old after all.

If you enjoyed this and want to read more like it, visit Lori on Twitter, or on Facebook. Lori is a National Society of Newspaper Columnists 2018 Columnist winner, and a New Apple, Readers’ Favorite, and eLit award winner for her latest release, “You Know I Love You Because You’re Still Alive.”  She is also the author of the bestselling books “Mismatched Shoes and Upside Down Pizza,” and “The Armadillo, the Pickaxe, and the Laundry Basket.”