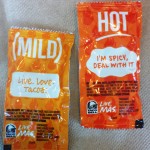 I have to admit that I spend a stupid amount of time at Taco Bell for someone my age.  I associate Taco Bell with college road trips, when I could get a taco or bean burrito for the amount of change I could find in the sofa cushions.  It’s a little more expensive now, but, then again, it has been a quarter century.

As it turns out, Taco Bell is currently the fashionable fast food for the younger teen set.  Taco Bell, as my daughter says, is “bae.”  My children like it, and whenever we drive by one, which is more or less every time we leave the house, the younger Duffs beg to go.  We leave the house a lot.  Laundry piles up because I am rarely home long enough to accommodate the wash, rinse, spin, AND dry cycles on the appropriate machines.  I give up and give in to fast food more than I should because, well, frankly, we need our food fast, and we need it on the way to karate from jazz band.  Or was it from archery to Hebrew school.  I can’t keep track of the days, to be honest.  I go where the calendar on my phone tells me to go when my phone tells me to go there.

Anyhoo, a few days ago we actually had something like 25 minutes in a row in which to eat, and the kids talked me in to Taco Bell.  Honestly, it is better now than it was back in the late 80s, and definitely better than a lot of fast food options.  There are actual vegetables in some of the entrees.  Precious little is fried.  The presence of beans tells me that there might be a gram or two of fiber lurking underneath the tortillas.

We ordered whatever we ordered at the counter (not the drive thru!  A great day!) and stood around waiting for our food.  There were several bins with sauce packets, ranging in heat from mild to molten.  On each packet was a short little saying.  One said, “Live, Love, Tacos.”  Another said, “I’m spicy.  Deal with it.”  Yet another said, “Will You Marry Me?”

I mean, I may be a Taco Bell apologist, and yo quiero Taco Bell more than I am proud of admitting, but I cannot imagine sitting at a Formica table with a hard plastic chair bolted into the ground and being overcome with both a romantic urge and a throat-tightening case of nerves, causing me to ask a life-altering question by way of passing a foil packet of mild sauce.  What a story for your grandchildren.  “Yes, Kawleigh-Flauer, (because by then the trend to name one’s child by taking a perfectly normal name and spelling it beyond recognition will have hit its peak) when your grandmother took a bite of her chicken Cantina burrito I was overcome by the way the fluorescent lights hit the sauce dripping down her chin.  I loved her so much at that moment that I knew I wanted to spend the rest of my life with her, but I was so afraid that she’d say no that I couldn’t speak.  I saw the sauce packet, and gave it to her.  She started to tear it open and pour it on her burrito, but I managed to croak out ‘no’ – and pointed to the message.  She finished chewing, and then said yes.  We framed the packet – it is over there on top of the old fashioned television set with an actual screen – and to this day the sauce is still in there, in the same way that our love is still in my heart.”

Kawleigh-Flauer has been smiling and nodding because that’s what he was told is polite, but he’s actually listening to the iPod implanted in his head when he was a baby.  This is 2055 or so, after all.

But I’m getting off topic.  What I’d like to know is who writes these things, and what their title is, and how the job was advertised.  “Wanted: copy writer to come up with pithy sayings to put on condiment packets.”  Is this an entry level position, or something you hope for a promotion into?  Is there a writer’s room like in a sitcom?  Are there lists and lists of rejected packet-phrases?  Who is in charge of deciding if the particular wording goes on a “Mild” or “Hot” or “Fire” packet? Does the guy who came up with “Live, Love, Tacos” paw through the bin for his contribution?  Did he bring his Mom to Taco Bell to prove to her that he does so have a real job?

Looking back over what I’ve written here, I think it is pretty clear that even though I began by talking about how little time I have to eat a dinner more fancy than Taco Bell, I clearly have too much time to think.  If you don’t like it, though, “I’m spicy.  Deal with it.”