My son turned 15 a week ago, and that means in this neck of the woods that he got his Learner’s Permit.  That’s right. My bitty baby, born two and a half weeks early, smaller by every measurement than my housecat, is now legally allowed to have primary control of a one ton projectile moving at great speed.*

He’s general a cautious kid, but I was not taking any chances.  I made him sit through the Teen Victim Impact Panel, which is kind of a scared straight program for young drivers.  After listening to speakers who killed people with cars, hearing from the parents of dead kids, and watching disturbingly graphic and realistic videos, I thought maybe he’d learned something.  So I asked him.  “Did you learn anything?”

So here we are.  I’d let him drive around deserted parking lots and up our driveway, but never on the real road.  It had to happen some time.  It happened last week.

We were in the car together, and he was whining.  Not whining.  Asking politely in a very insistent, relentless, manly way.  He wore me down.

I pulled into the shopping center near our home and parked.  “Take us through Taco Bell,” I said, and got out of the car.   He hopped in the driver’s seat, buckled his seat belt (good boy) and we were off.

He managed to get us through the drive through lane without scraping the sides of the cars.  This is something I only accomplish nine out of ten times I go through a drive through, so I figured we’d call it a success.  We both realized at the same time that this would be the first time he would be in charge of talking through the speaker.  He choked a little bit, but eventually ordered my 7-layer Burrito like a pro.  I took a picture and posted it on Facebook.  The caption was “Baby’s First Drive Through as a Driver Driving Through.”  It was as much a milestone and therefore worth capt 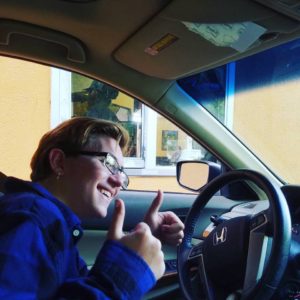 Tacos in hand, it was time to go home.  I questioned the wisdom of letting him drive on an actual road.  Oh well, I thought.  Nothing ventured, nothing gained, and it had to happen eventually.

He did well, if slow.  He stayed in his lane.  He used his turn signal appropriately.  And drove approximately twenty miles under the 55 mile per hour speed limit.  He was so slow that the car behind us lost patience and passed us on a double yellow.

There was no objective reason for me to be scared, but I was.  Not scared.  Nervous.  Everything in me was clenched.  If I’d had a fistful of charcoal, at the end of the three mile drive I would have had a fistful of diamonds.  My muscles were so engaged that lactic acid started to build up and I wondered if maybe I could consider this an isometric workout.  My voice came out as a strangled screech.

Eventually we made it home, intact if not efficiently.  When he began the climb up our driveway, something he’s done a million times before, I unclenched and began to breathe again.  In the end, I was proud of him.  He conquered his fear, did something new and scary, and didn’t kill anyone while he was at it.  That’s what I call a good Tuesday.

*I actually looked this up.  I drive a Honda Accord.  The interwebs don’t agree on how much a 2010 Honda Accord weighs, but it is anywhere from 2,000 to 3,200 pounds, or more, depending upon a) how many Duffs are in the car; b) whether or not the gas light is on; and c) how long it has been since I cleaned out the trunk.
DON’T MISS ANYTHING FUNNY!! Sign up below.