So when I was killing time by wandering around the local Wal-Mart while my daughter and her friends went on a search for glitter* and I found myself in the pajama section, you can believe me when I say that my heart stopped and the breath rushed from my lungs.  There it was.  On a rack.  In the beams of heavenly sunlight and the source of the angels’ chorus.  It was a Wonder Woman onesie.  In.  My.  Size.

I put it in the cart, atop the milk and eggs.

Eventually, I caught up with my daughter, who was duly horrified when she saw the purchase.  I held it up to my body.  “Isn’t it AMAZING?”  I demonstrated the hood, which had Wonder Woman’s iconic headband across the front.  I fluttered the cape.

She didn’t think it was so great.  But her friends did, or they pretended to, maybe because I was their ride home.

When we got home, I immediately put it on, took a picture of myself and posted it on Facebook.  One friend p 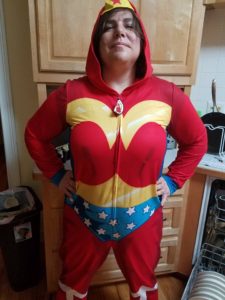 ointed out that, in the picture, it looked like I had a lactating malfunction.  I looked at the outfit in the mirror.  There were two dark shadowed lines leading crookedly from the chest to about mid-belly.  This was, I presumed, a shadow placed there by the designer to create the illusion that one’s rib cage unnaturally angled inward towards one’s wasp-waist.**  Also presumably, the designer did not anticipate that someone as old as I was and as saddled with the effects of gravity as I was would wear this thing.  Whereas on someone younger and perkier the shadows would begin mid-rib cage, on someone middle aged they began mid-mammary gland.

Still, I loved it, oddly placed shadows or no.

I wasn’t really done for the night.  I had to wait until midnight to drive to the high school to pick up my son, who would be coming home from his marching band performance at the football game.  On Facebook, I begged someone to dare me to pick the poor boy up dressed as I was.  I got a lot of takers.

And so I did.  Being devoid of shame, I could stay in my warm, snuggly, fleecy onesie and drive to the high school in house shoes.  Frankly, I’m not sure why anyone has kids if they aren’t going to try to embarrass them.  I can’t think of anything more fun.  Just to up the ante, I took a picture of myself in the onesie, hood up, in the car, in front of the high school, and Snapchatted the picture to my son and all his friends that I knew were on the marching band bus.  I sat back in the car, played a few games of Candy Crush, and waited.

Finally, the bus pulled up.  It parked just in front of my car, and I sat there, feeling a little silly wearing such stupid clothes.  Perhaps this was a bad idea after all.   I pulled the hood off my head.

I saw my son bop off the bus and look around.  He saw my car and came up to my window.  I braced myself for the tirade.  Instead, he said, “Mom.  Get out of the car.  Ms. Frazer wants to see your outfit.”  I opened the car door and hopped out.  Feeling like an idiot, I clung to the car door for support, cursing myself for not having the brass ovaries to stand there in the open parking lot with my legs shoulder width apart and my hands on my hips, striking an Amazonian pose.

Eventually, we all got in the car and headed home.  “You weren’t embarrassed?” I said.

I was torn.  On the one hand, I was proud that I’d raised a self-confident boy who knew funny was funny and shame just gets in the way of a good time.  On the other, I was going to have to try harder now to embarrass him.  I might just be tapped out of ideas.

No, Wonder Woman hasn’t been defeated yet.  I’m not going to give up this easily.

** This is a thing that no one’s waist actually does, except Linda Carter’s.  And we all know she is Wonder Woman for real.

Seriously. How sad would you be if you missed anything? Join the cool kids and sign up below.