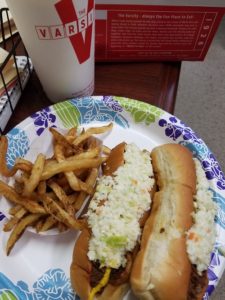 If you find yourself heading to Atlanta and you post something on social media like, “Going to the ATL – where should I eat?”  9,999 out of 10,000 people who reply will tell you to go to the Varsity.  The Varsity is a fast food joint, I guess, in that it serves hamburgers and hot dogs and French fries on cardboard plates at the counter.  However, calling the Varsity ‘fast food’ and lumping it in with the sawdust lumps of grey ‘meat’ you get at McJack in the BurgerOut is like calling a Rolls Royce a family sedan.  Yes, you can fit your family of five in it comfortably, along with all the soccer equipment you need to tote.  But seriously.  Not the same thing at all.

I am partial to the Varsity’s chili slaw dogs with extra onions.  There is nothing even vaguely nutritious about these nuggets of deliciousness, despite the cabbage in the slaw.  I can say without fear of contradiction from anyone who has actually had some variation on a Varsity chili dog, that placing one of those in your mouth is a sensual pleasure that will satisfy you like nothing else.  No, not even that.  Nope, not that either.  I said nothing else and I mean nothing else is quite that wonderful.

Even my friend and co-worker Diane, who is the kind of weird food person who won’t eat anything cooked by someone she hasn’t personally inspected the kitchen of, and who won’t eat foods that touch each other, and who is perfectly ok with eating broiled chicken and mushy green beans and white rice EVERY SINGLE DAY gets a misty look in her eye when you mention a Varsity Chili Dog.

Since we neither live nor work near the Varsity, the rule is that if anyone drives within five miles of the Varsity during a work day, we must text the office and see who wants what and then bring it back.  Such a thing happened yesterday, when I knew I would drive right by it at 11:45am.  Diane wanted chili dogs and to split an order of greazy fries with me.  (In this instance, it is imperative that ‘greazy’ be spelled with a ‘z’ since saying ‘greasy’ with the soft ‘s’ doesn’t quite do it justice.)  Kim wanted a Frosty Orange.  A Frosty Orange is sort of like a semi-liquid Creamsicle, only so much better, the kind of so much better that makes your eyes roll up in your head and forces a moan from your throat.

I got our order to go, and put it in my car, ready for the 45 minute drive back to the office.  I had a dilemma.  I did not want our dogs and fries to get cold, so I cranked up the heat, despite the fact that it was a typical muggy, 80 degree Georgia May day.  Then it occurred to me that doing such a thing would make the Frosty Oranges melt.  I compromised by putting the boxes with the dogs on the seats and turning the seat heaters on ‘high’ and pointing all the air conditioning vents at the Frosty Orange cups.  My personal comfort was not an issue.

It occurred to me that if I drove just a leeeeeeeetle or maybe a lot faster than the speed limit, and I got stopped, I’d just have to point at my Varsity boxes and tell the officer that I had cooling chili dogs in the car with me.  I’m fairly certain that not only would I get out of a ticket, but I might even get a blue light escort to the office, especially if I shared my bounty.

I’m told that my chili doggin’ days are limited.  My older friends can no longer digest them properly and, as Lewis Grizzard even titled a book, “Chili Dawgs Always Bark at Night.”

Honestly, though, I don’t mind if my dogs bark a little.  They’re dogs.  That’s what they’re supposed to do.  Just so long as it doesn’t bother the neighbors.

Ode to a Varsity Chili Dog

Ode to a Varsity Chili Dog