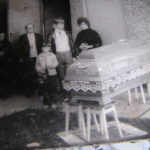 Right about the time I graduated from college, my friends started getting engaged.  It got to the point where every week there was either an engagement, a shower, or a wedding.  This was what my social life was: pretending to care when someone unwrapped a Mr. Coffee, elbowing other women wearing uncomfortable dresses out of the way for the bouquet, and secretly taking notes for my own celebration, which eventually occurred near the middle-end of this life stage.

For a while there was a lull.  A few people got divorced.  A few got married and remarried.  Kids got Bar Mitzvah-ed.  Some kids got married.  Some people had grandchildren and had to decide if they were “grandma” “meemaw” “granny” “nanny” “nana” “gigi” “meemee” “nini” or any other made up combination of nonsense syllables that tries desperately to indicate grand-maternal pride while not sounding like a blue haired woman with a ratty shawl and an ear trumpet.

And then, right about the time I turned 40, it happened.  A high school friend dropped dead.  He wasn’t sick, that we knew of.  He just, as they say, woke up dead one day.  There was no car accident, no catastrophic illness he fought courageously – just the lightning strike of a heart attack and the rest of his life that would never be lived.

It threw me for a loop.  I didn’t know this guy well, but he was part of my childhood, and he wasn’t older than me.  He didn’t have kids, which was a small blessing, but it made my own mortality come crashing down around me.

It’s happened several times since.  As a lawyer, I’m often one of the first people to know, because I have some practical knowledge about what to do in these situations.  But it doesn’t make it any easier.  I still get creepy Candy Crush requests from friends that have died, which is proof that you have very little control over who you send those things to.  Funerals have become the new former-workplace reunions.

It’s a kind of weird I still can’t really wrap my head around.  One day my friend is there, having lunch with me and making inappropriate jokes or talking about our kids, and the next day, they’re not there, like some kind of irreversible magic trick.  When I drive past their houses or workplaces, I find myself wanting to stop in and say hello, even though I probably wouldn’t have when they were alive.  Another weird thing about it is that, like I used to do with weddings, I find myself taking mental notes about what I do and don’t want at my funeral.

So I’m putting this out there, here in this public forum, so there is no question:

That’s a good, morbid start, no?  I just hope someone can find this in 70 years or so when it is needed.  Because for now, if laughter really is the best medicine, I’m going to live forever.