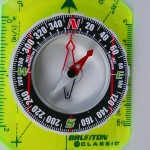 I have a pretty good sense of direction, so I’ve never really had a problem getting from Point A to an unfamiliar Point B.  Even before the days of GPS and Google Maps.  Of course, I only vaguely remember those days.  I rely heavily on my GPS and even when I know better I get nervous disobeying what it tells me to do.  I feel like I’ve misbehaved when the lady in the GPS in my car admonishes me to “Make a U-Turn when possible.”

Recently, we went to a Boys & Girls Club fundraising event, located at the beautiful Fair Weather Farms in Monroe, GA, a place I’d never been before that night.  I knew vaguely where it was, and I had the address, and so I needed nothing else.  So I thought.

My car is getting on about five years old, and the information in the GPS is that old, because I am too, um, thrifty to buy the update for it.  I entered the address, and looked at the turns it wanted us to make.  It all made sense to me, and jived with my general sense of where the place was.  We set off into the sunset.  Everything was going according to plan.  We weren’t even really late.

That is, until we got to the new reservoir project that was in between where we were and where we wanted to be.  There were detour signs, and signs that said, “No Through Traffic,” but there were cars (i.e. an ambulance and a minivan full of kids) headed back in our direction on the other side of the signs, so we figured it was probably passable.  We slowly slowly crossed the partially constructed dam that seemed to be made out of a giant pile of mud.  We got back on a paved road, and then the GPS told us to turn right. There was a road there, maybe more of a passageway, or possibly a driveway, but whatever it was it had tire tracks visible.  There was an open gate at the front of it.  We stopped near the entrance, and I tried to call my friend Lindsay who was already there to see if we should chance it or if there was a better way around.  Zero service.  No bars at all for the phone, and no 4g or 3g or stray wi-fi to glom onto.  Deprived of other options, my husband and I decided to forge forwards.

There wasn’t much visibility due to the hills and valleys.  The horizon was never more than 100 yards or so in front of us.  We had no idea what we were driving into, although there were definitely not-yet-filled reservoir basins on either side of the ever narrowing strip of dirt road we were on.  We found ourselves on a down slope.  Due to the curves of the road, we couldn’t get a good look at the low point.  It looked kind of shiny in the waning sunlight.  I couldn’t tell if it was a giant puddle or a mirage.

It was in fact a giant puddle.  We stopped about 20 yards away from it and contemplated what to do.  According to the GPS, our destination was only a quarter mile ahead.  We looked at the map and decided that even though it was a much longer way, there were enough roads to go around.

Mike was driving.  He tried to back up to do a three point turn.  I am six inches shorter than he is, and from my vantage point, I couldn’t really tell where the edge of the road was.  I hoped he could see it.  At first, it didn’t matter whether or not he could see it.  In our minute’s hesitation, the car sunk into the mud and we were stuck.  The tires spun.  Mud kicked up in a spray.  I was wearing impractical party clothes, and not interested in ruining my favorite boots.

Finally, we lurched backwards.  I had visions of us careening over the side of the mudcliff into the unfilled reservoir basin.  I checked my phone.  Still no bars.  Still no wi-fi or internet service of any kind.  If we fell, I would have no way to contact anyone, and it could be days before any other moron tried to pass this road.  I didn’t want to die in a mudpit.  When I die, I at least want to be clean.

Mike switched into drive, and we spun and then went forward a foot or so.  After a seventy-five point turn, we were able to get around and start climbing back to the ‘real’ road.  Even as we participated in one of the most epic GPS fails in recorded history, the recorded voice told us to make a U-Turn.  I turned that witch off without waiting for her useless self to “recalculate.”

We drove for a little while longer, and eventually came upon a road going in the direction we wanted to go in.  A truck was coming back the other way.  We stopped to ask the truck driver directions.  He looked at us in our fancy clothes in our muddy, foreign, family sedan, and told us that we were going completely in the wrong direction, and told us to follow him.  We did, and found our destination on a perfectly paved road.

I don’t know who you are, Mr. Truck Driver, but you saved my life that night.  I’d swap you and your practical ability to know where you are for my GPS any day.  Barring that, maybe this year I should pay for the updates.