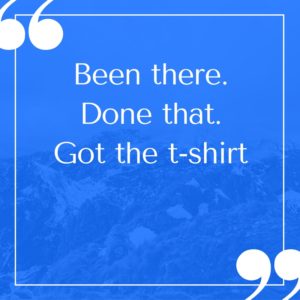 Generally speaking, I’m not a big fan of stuff.  Stuff is just clutter.  I want to get rid of stuff.  I’m not particularly sentimental, although I do have trouble getting rid of stuff with faces.  Photographs, stuffed animals, even Happy Meal Toys.  Their little eyes just look up at me from the trash can and my heart breaks.

Back when I used to have time to sit still and watch television, I would make little crocheted stuffed animals for friends when they had babies.  I thought they were cute, even if no one else did.  Part of the creation process involves scissors and stabbing the half-made critter with needles.  Which was fine – it was just yarn and fluff.  Except that once I sewed on a face I felt like I had to be nicer to it.

Which is a long introduction to this:

I also realized recently that I collect t-shirts.  I have what seems to me like upwards of seventy million t-shirts.  I have so many that I have to keep some in the hamper at all times because I don’t have enough room to put them all away.  Everywhere I go, everything I do, there is a t-shirt to mark the occasion.  Most of them have dates on them and a description of the event.  Some are cuter than others, but they all trigger memories.

Some of them are really old.  Like high school old, keeping in mind that Ronald Reagan was president in my high school years.  This means, quite literally, that some of the t-shirts I actually wear (even if it is just to bed) are older than my kids’ teachers.  It used to irritate me when people who were older than me said things like, “I have socks older than you.”  But the truth is that I do have some vintage 80s slouch socks that are, in fact, older than you.  Well, maybe not you, but *you* over *there*.

A good number are from college, most of them marking things my sorority did, like rush and our annual Twister tournament on the quad.  Every time I put one on I think of my sisters, and maybe how we argued over the design of the shirt.  I have one from rush from 1990 (which I know because it says 1990) which makes me think of Gerry Rogers every time because she drew the giraffe on the front.

Lots of my t-shirts are new, or new-ish.  The latest addition to my collection is from the Loganville Police Department’s “Donut Dash*,” a 5k race, the proceeds of which go to support the Special Olympics, an inarguably fabulous cause.  I didn’t run, or even try to mosey the 5k, mainly because it started early in the morning and I’m just not getting up early on a Saturday.  But I did donate enough money to the cause to get my name on the back of the t-shirt, which is how I earned one.  The one before that was an Emory Alumni shirt, given to me when I was in the Emory Alumni tent at the Decatur Book Festival.

You could probably take all those shirts and line them all up (assuming you had enough football fields in which to do so because seriously, we are talking about a LOT of shirts) and get a pretty accurate picture of who I am. You’d know where I was and when.  You’d know what causes I support.  You’d know what size I was at any given moment.  (Answer: XL, except for a brief period in the mid-90s when I was a medium.)  You’d know I’ve been there, I’ve done that, and I got the t-shirt. I’ve thought about doing one of those quilts, but I don’t know how I’d narrow my choices to 16 t-shirts.

Every once in a while they wear out, and that’s sad.  They get so holey they are useless for anything but a dusting rag.  Right before that point is when they are at their peak – soft and worn, there is nothing better to sleep in.  But I guess t-shirts have to wear out, or there wouldn’t be room for new t-shirts.

Not that there’s much room now.  I’ve got a lot of memories.

*Is that not the most fabulous name a police department could ever have for an event?  The logo is a donut with legs and a police hat.  Love people with a sense of humor.

Been There. Done That. Got the T-Shirt.

Been There. Done That. Got the T-Shirt.