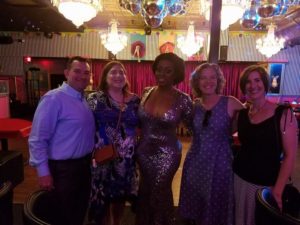 The other day, I went out to brunch with some old college friends that I hadn’t seen in a while.  Three of us had kids, roughly the same age.  The lone guy was single with no kids.

The two other women and I realized rather quickly that the only thing we were talking about was our kids, and poor Frank just sat there, nodding, probably bored out of his skull and wishing we’d talk about something interesting.

We found out rather quickly that we had very little else to talk about except our jobs, and who wants to talk about work on a Sunday afternoon? Kristen and Lynn are both college professors, engineering and math respectively – go STEM girls! – and I’m a lawyer.  We are a highly educated, well-read crowd.  We’re all musicians to boot, and we all have a decent sense of humor. We should have had other things to talk about, but our minds went right to our children.

Frank, on the other hand, led a life of adventure.  Where most of us fill out those maps that pop up on social media from time to time about what states we’ve been to, Frank could fill a globe like that.  He talked about that.  We talked about college tours and puberty, teenage dating and driver’s licenses.

Don’t get me wrong.  I love my kids dearly, and I know Kristen and Lynn feel the same.  The world is a better place because our children are in it.  I truly believe that I only had an inkling of what love was until I held my babies in my arms.  They’ve taught me about the world, brought me places I wouldn’t otherwise go, and given me hope for the future.  I wouldn’t change my life or their role in it for anything.

But that didn’t stop me from being jealous of Frank’s freedom.  After apologizing to him for the fiftieth time about being one of those people who just blathered on about her children and why they are the most perfect, amazing beings on the planet, I realized what the problem was and I said it out loud.

“I’m sorry,” I said.  “It’s just that I’ve been living someone else’s life for the past sixteen years.”

Kristen and Lynn nodded in agreement.

The afternoon reunion threatened to become a pity party.

But then the show started.

I realize, as I type this, that I neglected to set the scene.  This was not a brunch at a typical pancake house.  No, we were at a drag brunch, at Lips on Buford Highway in Atlanta.  It was the first live drag show I’d ever been to and I was excited for it.

I’ve mentioned before how I think drag queens have something to teach us all, and that brunch was no exception to that rule.  While each Queen has her own personality and style, there’s a common thread to be found.  (And no, I don’t mean their anatomy.)  They are all energetic, passionate, irreverent, and fun.  There’s something infectiously happy in the over the top campiness of a pink sparkly room decorated with disco balls and crystal chandeliers and can-can legs mounted like deer heads.  It was a French house of ill-repute as conceived by someone just out of a Disney Princess phase.  I considered copying the décor in my own living room.

They passed out tambourines.  We clapped our hands and shouted, shaking our shoulders to the music, digging through our wallets to find singles to put in the offering plates of their fluttering hands.  We were in a house of worship and the religion was pure love and joy.  These were performers of the highest order: skillful magicians creating illusions of a world where too much is never quite enough.

I wondered how they kept their eyes open with false eyelashes so long.

I wondered how they kept such elaborate wigs from falling off during acrobatic dances.

I wondered why one of them looked better than I did in a dress I was pretty sure I owned.

And I didn’t wonder about school lunches or coordinating carpools or what to have for dinner that at least three out of four of us would eat or whether my daughter and I would survive the twin disaster that is menopause and puberty in the same household at the same time.  I was only vaguely aware of politics and the outside world.

No, I was in the moment, and the moment was an excited gladness.  I was filled with the spirit of exultation.  I watched my friends smile and laugh with abandon and reveled in it.

When the show was over, I wasn’t deflated by its absence.  The conversation didn’t go back to where it was.  We talked about our lives, our travels, our loves and losses, what our ambitions were and what they are now and why.

Our kids came up from time to time – it would be weird if they didn’t – but they weren’t the focus of everything.  We can love them passionately and prioritize them as number one and still have room in our repertoire for other topics of conversation.  We can still be us.  After all, they will fly the nest soon, and there’s no reason why the nest has to be completely emptied out when they go.

It’s better for our kids to see us as whole people with friends and interests and fun.  They need to know that while they may be the center of our personal universes, they are not the center of THE universe.  I want them to aspire to be adults with something to say, and I want to exemplify that as best I can.

And if it means I have to have brunch with old college friends at a drag show on a Sunday afternoon, well, then, that’s just what I’ll do.

If you enjoyed this and want to read more like it, visit Lori  on Twitter, on Facebook, or on Instagram @LoriDuffWrites. For the Best of Lori, read her books, “Mismatched Shoes and Upside Down Pizza,” “The Armadillo, the Pickaxe, and the Laundry Basket,” and her latest release, the 2017 eLit Gold Medal winner for humor, “You Know I Love You Because You’re Still Alive.”

Someone Else’s Life (With a Side of Drag)

Someone Else’s Life (With a Side of Drag)