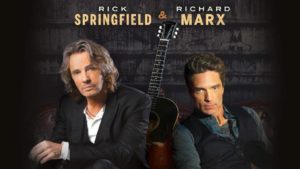 I will not deny that I am older than my 47 years might imply.  I’m not particularly young at heart, I’m a soul that belongs in assisted living.  I know this for many reasons, not the least of which was that I went last night, with my good friend Eleni, to see Rick Springfield and Richard Marx play an acoustic joint concert.

First of all, I think it is important to state the obvious: the audience was primarily women hovering around 50 years of age.  It felt, to me, like it was 70 billion degrees in Symphony Hall in Atlanta.  With that many middle aged women in the room, it seems like it would have been a good idea to crank up the A/C for the collective comfort of the audience.  Of course, with that many human furnaces in one place, that may very well have been an impossible task.  I spent most of my time sweating.

Also, like most women my age, I have a day job, and kids to boot.  Early mornings are a thing.  This means that late nights are decidedly NOT a thing.  I got home a little after midnight.  To quote Eric Clapton, completely out of context, “After midnight, we gonna let it all hang down.”  Only by “let it all hang down” I mean the complete removal of all supportive undergarments.  If I’m wearing a bra after midnight, something has gone terribly wrong in my day.

But, you say, Rick, ole Dr. Noah Drake himself, is pushing seventy.  Seventy!  He was bopping around and performing and even climbing over the seats to get some of that “Human Touch.”

Is that supposed to make me feel younger by comparison?  Because it doesn’t.  Because, well, he’s a rock star and I’m not.  He didn’t spend his day getting yelled at by cranky clients and opposing counsel.  I mean, I haven’t followed Rick around so I don’t know how his days go, but I would bet all the money he made off of “Jessie’s Girl” that his days don’t look anything like that of a middle class suburban working Mom’s.  Comparing my energy level to that of 68 year old Rick Springfield is like comparing the energy level of a 9-volt battery to the energy level of a nuclear reactor.  Plus, I’m also willing to bet the B-Side profits from Jessie’s Girl (a song I had to look up called “Carry Me Away”) that Rick didn’t have to get up at 6:00 am to make sure his teenagers got out of the house in time for school.  Not the day before, not the day of, and definitely not the day after.

Besides.  Rick did have some old man grumbles, especially about people using cell phones during the concert.

Instead of getting wine or beer during intermission, I got coffee.

Lest you go about digging my grave right now, I would like to point out how many of the lyrics I remembered.  I have been unsuccessfully trying for a week to remember to bring wrapping paper to my office so I can wrap some holiday gifts, but I could still accurately place all the “yeahs” and “uh-huhs” in songs I might not have heard in twenty years.

I did have a good time.  I enjoyed the company of my bestie and the nostalgia trip of songs that came out when I was my kids’ age.  I’m guessing in 30 years or so they’ll be seeing Beyonce up on that same stage, singing all the verses of “Lemonade” and complaining about how late the concert was just like I am now.  Their kids, my darling, perfect grandchildren, will be rolling their eyes about how uncool their parents are going to see a dinosaur like Bey instead of [insert name of 2047’s hot new boy band here.]

I’m sleepy today, three cups of coffee are keeping me passably functional but not wide awake.  It was worth it, though.  Even if after a day like today my assistant has every right to say, “I’ve Done Everything for You.”

If you enjoyed this and want to read more like it, visit Lori  on Twitter or on Facebook. Lori is the Readers Favorite and eLit award winner for her latest release, “You Know I Love You Because You’re Still Alive.”  She is also the author of the bestselling books “Mismatched Shoes and Upside Down Pizza,” and “The Armadillo, the Pickaxe, and the Laundry Basket.”