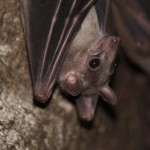 There has been a family of bats residing behind the shutters on the porch of my house on Lake Oconee for more than a year now. They don’t really bother me much. I like that they eat bugs. I like that they don’t bother anyone during the day, and during the night they look awfully cool silhouetted by the moonlight. I don’t particularly care for the pile of pebbly bat guano that builds up underneath the shutter, though. We sweep it into an old bucket because it is fabulous fertilizer. In fact, without looking it up, I happen to know off the top of my head that it can be a lucrative cash crop: it is the primary export of the Island Nation of Nauru, for example. There is a very live and let live attitude between the Duff family and the bats. Marginally symbiotic, neither party has any interest in disrupting the relationship.

One Monday morning, not long after the Great Armadillo Infestation (click here and here for an explanation about that very Duffesque phenomenon,) I left my family sprawled out in their respective beds at the lake house, and trucked it into town to Take Care of Business. The day rocked along without incident, until early afternoon, when my children started sending me the “I’m boooooooooooooooooored” texts, because those poor deprived children were being forced to spend the afternoon with their father in an environment with a lake to swim in and a yard to play in but (brace yourself) no wi-fi. They were begging me to come get them and take them home because they just couldn’t take it anymore.

Naturally, I had very little sympathy.

Then, at 4:41, I received the following text from my son: “Pllleeeeaaaasssseeee there’s a freaking king snake in the shutters the bats are freaking out and all the babies are crawling all over the yard dad was saying he was going to take down the shutters to clean them out and I made a joke about that being another three year project and he got mad.”

I mean, I hate missing out on a beautiful summer day on the lake with my family as a general rule, but missing a blog-worthy incident like that one? Pure tragedy.

Before I got a chance to respond, “WE SAVED LIVES” came via text from his sister.

Marin:  Lives would’ve been lost without me and Dad

Marin:  A snake attacked the baby bats and we saved them.

[At this point, I pictured my daughter dressed like Xena, Warrior Princess, ululating and swinging a broadsword over her head towards the snake, which immediately dropped the baby bat in its mouth and slithered off, frightened. As an aside, how tasty could a baby bat possibly be? How many nutrients could be in that small body so full of tiny bones and flaps of skin? They’re probably the chicken wings of the snake world’s diet.]

Marin:They crawled away from the massacre and we put them in a bucket before the snake could attack them again.

Marin:  And one of them got away without our help but we found it in a wet ball of sadness. It looked like it was about to die.

That is, in fact, my girl. She has to pick a community service project for her upcoming bat mitzvah (seriously – no pun intended) and she has toyed with the idea of something involving “saving ugly animals, because everyone wants to save the cute, cuddly ones, and no one cares about the ugly ones.”

No. There are no “save the blobfish” rallies or t-shirts I’ve ever seen. No one buys a cockroach-shaped stuffed animal, or says “awwwww!” every time they see a rat. I’m not aware of anyone else who thinks “save them” in the battle of bats vs. snakes.  I think it’s awesome that she immediately thinks of the underdog animals, the ones that might be misunderstood simply because they aren’t cute. I hope she feels the same about people.

In the meantime, I seriously hope she doesn’t get rabies.