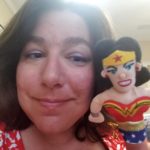 Which one is real?

It should surprise absolutely no one who has met me for more than twenty minutes that I went to see the new Wonder Woman movie the minute I was able, which was actually the day before the wide release premiere.  A movie theater near me was doing a special sneak preview, complete with a woman dressed like Wonder Woman in the lobby available to take pictures with.

I really wanted to like this movie.  Which means one of two completely opposite things – I was going to like it either way because I wanted to like it so badly, or I was going to hate it because it couldn’t possibly live up to my inflated expectations.  As it turned out I loved it, but whether I did because I wanted to or because it really was good, I’m not quite objective enough to say.  But consider the following observations:

I’d write more, but I’ve got to go.  I’ve heard a rumor there are bad guys infiltrating my office, and my golden lasso needs to be taken out and exercised.  You WILL tell the truth!  Ka-POW!

If you enjoyed this, visit Lori  on Twitter or on Facebook. For the Best of Lori, read her books, “Mismatched Shoes and Upside Down Pizza,”  “The Armadillo, the Pickaxe, and the Laundry Basket,” and her latest release, the 2017eLit Gold Medal winner “You Know I Love You Because You’re Still Alive.”

I Want a Wonder Woman Lunchbox

I Want a Wonder Woman Lunchbox