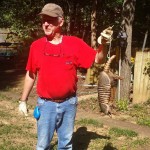 This is part two in a series. For part one,  click here.

I’ve never shot and killed anything in my life. This is partly because I grew up on Long Island where the population density is such that if you fire a gun in any direction at any time of day or night you are guaranteed to hit another person so no one except bad guys shoot them at all. It is also partly because even if I wanted to shoot and kill something, odds are good I would only maim something unintentional, probably myself.

I started my legal career as a prosecutor and, for professional reasons, had to handle a lot of guns. I decided that it would probably a good idea for me to learn about them. My husband Mike, who was at the time pre-retired and therefore a working police officer, took me in the woods behind our house, setting up milk jugs filled with water as targets. He gave me his .25 baby Beretta and a short tutorial on how it worked. It was a tiny thing, almost cute, smaller than the palm of my hand.

Confident that I could perform a simple task like pulling a trigger while holding the gun in a steady direction, I took aim at my milk jug victim and squeezed the trigger. The force of the recoil from such a tiny little device startled me, and without thinking, I threw my arm backwards and upwards. Mike caught my arm and gently removed the gun from my hand. “You get one bullet at a time,” he said, removing the clip.

I shot a few more times that afternoon, but that was the last day I pulled the trigger on anything. I haven’t even played paintball. The world is a much better place if people other than me have access to firearms.

So needless to say, when an armadillo needed killing in our yard, it was not me who was going to do it. My husband, the ex-police sergeant with a sniper-like ability to hit the things he aims at (he claims to be able to hit carpenter bees with a bb gun, which explains the little metal pellets all over my deck) dispatched the creature with only five rifle slugs (his excuse: it was dark, and the armadillo was small and skittery and armor plated), and as a result, I now had a dead armadillo in the crawl space.

Under the best of circumstances, armadillos smell. Under the worst, they stink to high heaven (and low heaven, and every heaven in between) and carry leprosy.

The next morning, I went to plant some moonflowers in the flower bed next to our deck. I sank down to my knees to dig the hole and saw, with metaphorical x’s over his eyes, a remarkably intact armadillo through the lattice separating the flowerbed from the crawl space. I don’t know how I didn’t smell it before I saw it.

This is Georgia. This is summer. Dead things get rank quickly.

It was time to force the Great Armadillo Hunter to do something about his prey.

It was no small task getting the armadillo out. It took thick leather gloves, a shovel, and a rope. Mike tied a rope around its tail and somehow dragged it out. He then stood up, with a stinky possum on the half-shell dangling by his side.

I wanted to feel badly for my part in killing an animal I had no intentions of eating. But I couldn’t. It looked pre-historic. It looked mean. It smelled worse than my 13 year old son’s running shoes. It had nasty looking prickly hairs sticking out from the bottom. Its only purpose in the biosphere that I could tell was to dig up the foundation of my house and spread disease.

We thought briefly about tying it to a tree in the yard of the neighbors whose dogs are always getting out and pooping in our yard, but we’re better people than that. Not better enough to refrain from the fantasy, but better enough not to actually do it. We thought about throwing it in the lake and letting it be fish food. Instead, we gave it a semi-proper burial in an unmarked grave in the woods.

Thank God Mike was there to deal with it. If it were up to me, I probably would have just let it tear down our house, one clawful of dirt at a time.