Note: On January 14, 2017, my daughter became a Bat Mitzvah.  It is traditional for the mother (me) to give a speech going on and on about how awesome her child is. There were so many ways that my daughter was awesome, I didn’t know how to list them all without being boring. Then it dawned on me: Shrek.  Here’s the transcript of my speech. 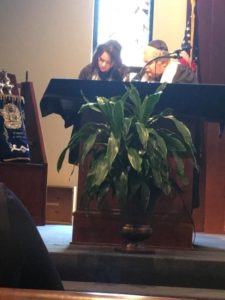 In the movie Shrek, when Shrek and Donkey are getting to know each other, Shrek says, “There’s a lot more to ogres than people think.  Ogres are like onions.”

Donkey says, “They stink? They make you cry?”

Donkey thinks about this and says, “You know, not everyone likes onions.  Everyone likes cakes.  Cakes have layers.”

And so, Marin is like an onion.  Let us peel back her layers and see what’s inside.

On the outside, we see this: a girl of surpassing beauty, with long, heartbreaking legs and luminous blue eyes.

But let’s peel that superficial layer away; that’s the paper layer that might get your attention, but it isn’t going to season your stew.  Underneath, you find talent.  You’ve heard today how well she can sing.  You may or may not know that she also plays the guitar.  She also plays the flute impressively well.  Her ear is near perfect – she can hear slight variations in pitch that professional musicians only dream of being able to do.  Yes, she’s talented all right.

But there’s another layer beneath that.  Anyone who has talked to her for more than thirty seconds knows how intelligent she is.  How she absorbs information instantly and processes it in ways most of us are not capable of.  How, when she’s paying attention, nothing gets by her.  Yes, she’s gifted in the true sense of the word.

Yup, beauty, talent, and brains – that would be enough.  But there are more layers.  Underneath all that is her humor.  Ever since she learned to speak she’s had an uncanny sense of humor far beyond her years.  Her first made up joke, is this one, made before she could even pronounce the words properly:  She said to her father, “What’s that?”  “What’s what?” he responded.  “Your pwobwem.”  Hilarity ensued.  Her Marinisms, her Marin’s Quotes of the Day on Facebook have a small cult following.  This girl is hilarious.

You think I’m done?  Oh heck no.  I’m just getting started with layers.  Her Achilles heel has always been her empathy.  She feels deeply for anyone in pain.  She’s known as the “mom” of her friend group because she always wants to take care of those around her.  She wants everyone to be well, physically and mentally.  When I’m sick, she always makes sure I have a teddy bear to cuddle.

This extends to people she doesn’t even know.  She makes a point of finding something to compliment in every cashier she encounters.  It might be their hair, or their eyeliner, or their manicure, or the color of their shirt.  She will find something. She will chase people down in stores to give compliments.  These random acts of kindness make my heart swell with pride.

You want another layer?  Here’s another layer – if she wants to, she can and she will.  The trick is getting her to want to.  But when she does, there is nothing that will stop her.

How about this layer?  She is a powerful and loyal friend.  When her friends are put on the defensive, Marin is right there defending them as if she were the one offended.  Crossing one of Marin’s friends is the same as crossing Marin, or maybe the same as crossing a Mama Bear with newborn cubs.  She will level you with that death stare that cuts like a light saber.  You cannot win an argument against Marin.  Trust me – I’m a lawyer, and I’ve tried.  I lose every time.

I’m convinced she will take over the world one day.  I’m convinced she will use these powers for good – or at least I hope she will.  She’s not a cake.  Everyone likes cake, but she’s not a cake.  And here’s the thing – you can get sick from too much cake.  You can get tired of cake.  But not onions.  They’re versatile and delicious.  Marin is an onion, all right.  A savory, spicy, sweet, and flavorful onion.

And I love onions.  Better than cake.

The Bat Mitzvah Girl, the Ogre, and the Onion.

The Bat Mitzvah Girl, the Ogre, and the Onion.