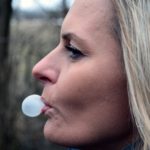 I’ve never been much of a gum chewer.  As someone who has teeth removed and orthodontia to fix Temporomandibular Joint Disorder (TMJ), I’m lazy and not a huge fan of exercising those (or any) muscles unnecessarily.  (Especially when there are so many wonderfully necessary uses for those muscles, such as eating pie.)  Plus, gum loses its flavor quickly for me, and tastes sour after mere minutes.

I am in the minority.  Most people I know have a pack of gum within arms reach of any chair in which they regularly sit.  I’m always being offered gum.  I always refuse.  So what, right?

I’ll tell you what.  I cannot bear the sound of someone else chewing gum.  It is such a wet, sloggy, sticky sound.  The moist clicky noises don’t only make me sick to my stomach.  They create a visceral, almost violent reaction.  I feel like my head is being pelted with spitballs, and I become filled with a blind, uncontrollable rage.  I say uncontrollable, but I –almost — always control it, at least outwardly.  But the shouting in my head, which peppers words like “cud” and “disgusting” and “heifer” with words decidedly more peppery, drowns out all dignified and rational thought.

I have actually had this thought flit through my brain: “If you don’t stop chewing that gum like you’ve just coughed it up from your fourth stomach I will drive this minivan directly into that tanker truck in front of us, see if I won’t.”

Since I’m American, I consider every thought that isn’t comprised of sunshine and rainbows and optimism (and some thoughts that are too sunshiny and rainbowy and optimistic) as a diagnosable disorder.  This particular diagnosable disorder is Misophonia which, according to Wikipedia literally means “hatred of sound” in which negative emotions are triggered by specific sounds.  The sound of gum chewing is specifically listed as a trigger.  So, without the necessity of finding a Misophonia specialist and being subjected to a battery of tests which require me to (I’m assuming) color within the lines using pastel colors while listening to a nine year old cram an entire pack of Big League Chew in his mouth, I’ll go ahead and diagnose myself.

I say nine year old and Big League Chew in that paragraph there, because it sounded funny to me.  But the truth is that the worst gum chewers seem to be the oldest gum chewers, and the more closely they are related to me the worse my Misophonia sends red lightning bolts to cloud my retinas and judgment.  Maybe Nicorette gum just sounds worse than Hubba Bubba.  Or maybe baby teeth don’t make the same sloshy, goopy sounds when unsticking themselves from gum as their crowned, be-fillinged elders do.  Or maybe older folks hear worse and can’t self-regulate the racket they are making because they can’t hear it to know it is happening.

What sounds drive you up a tree?  Let me know I’m not alone in the comments below.