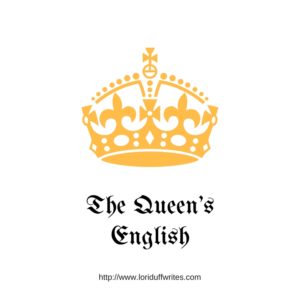 What does one do when the Queen’s English will not suffice?

I have a semi-well-deserved reputation amongst my friends as being a high ranking official in the local office of the grammar police. It is true that I have very strong opinions about the Oxford comma. It is also true that a misplaced apostrophe will actually peel the enamel off of my teeth.  I worry over obscure and hair-splitting things like whether or not to say “the myriad ways things are done” or “there are a myriad of ways in which things can be done.”*  I’m enough of a fan of the Queen’s English that I even prefer the superfluous “u’s” that British people tend to use – like in flavour, harbour, and honour, though I draw an imaginary line at “colour.”

One would think, especially because I just began that sentence with the word “one” instead of the more colloquial “you,” that I would then be a purist when it comes to vocabulary.  This is not true.  At all.

If you have read more than, say, three of my blogs, you will know that I make up words with reckless abandon.  This is largely because I am lazy, but also precise at the same time. I know there is a very specific word out there that means exactly what I am trying to say, but I don’t know what it is. A word that ‘almost’ means what I am trying to say will not cut it.  I could pore through dictionaries or thesauruses (thesauri?) to find out the correct word, or I could just make one up.

Like, for example, the word “sploop.”  This is a measurement.  And also a verb. It is the amount of semi-solid stuff (like maybe cookie dough or whipped cream) that comes splooping off the spoon when you give it a hard shake.  You know exactly what I’m talking about right? And if I hadn’t explained it, but had just used the sentence, “I put a piece of pie on the tray, and ladled out a sploop of ice cream to go on top,” you wouldn’t question the meaning either.  (Now that I’ve written all of that, I suppose that “dollop” is a better – and real-er – word that says the same thing.  But honestly, isn’t “sploop” funnier? And doesn’t it capture the falling motion and the sound effect better than “dollop” does?

I also make up numbers and expletives.  You might not know exactly how many zeros are in a squizillion, but you know it is unfathomably large.  Likewise, if I am putting together a piece of Ikea furniture, and can’t get the flippinflappin snÖrg marked “A” to fit into the kienwåčl marked “B” properly, you’ll know I’m not paying it a complement.

Often, Yiddish will serve me when English does not. And, here in the deep south, with the exception of just a few of us, I may as well have just made up the word.  I end up using “schmatta” a lot.  “Schmatta” literally translates into something like “rag” but it is used to mean a shapeless and/or poor quality garment.  “Are you going to wear that schmatta?”  Why yes.  Yes I am.  It is warm and comfortable and I don’t care what I look like.

This is all in contrast to my day job, in which I get to use words that are in fact real, but not recognized by Microsoft Word which, I think, has a setting for all manner of languages, but not “Legalese.”  Words like “hereinafter” and “wheretofore” and “whenceforth.”  And, Bill Gates, or whoever it is who is in charge of such things, “therefor” is a completely different word than “therefore” and you need to quit it with the autocorrect.  The other day, I got to type the word “usufruct” over and over.  I may use that next time I need to have a made up dirty word.  It sounds seedy.

I’m completely fine with words like “gonna” and “ain’t” and “aiight” because, while not exactly the Queen’s English, they set a tone and a mood that “going to,” “are not,” and “all right” do not.

So, say what you want to say. Just be clear about it.  And, for the love of all that is good and holy, do not use an apostrophe for a plural.

*Feel free to discuss your opinions on this matter in the comments below.  Don’t be afraid to feel passionately one way or another.  I’m with you.  Really, I am.  But only if you insist on using the word “of” – though the dictionary disagrees with me, it irritates me when “myriad” is used as an adjective.  I can’t justify this. But why must we always justify our feelings?  Isn’t it enough that our feelings are sincerely held?