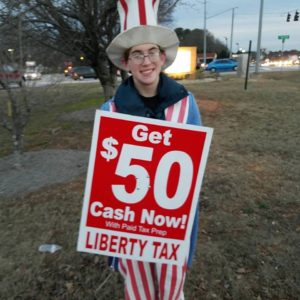 I can’t count the number of times I’ve said this in response to a sentence that starts “Mooooomm!  I waaaaant.” Well, my boy finally took my advice.

My boy, who is now so old that if he goes a few days without shaving you can see the stubble on his jawline from ten paces, has needs.  Needs I’m not willing to pay for.  Needs like vinyl records for his faux-vintage record player.  Needs like probiotic drinks in fancy glass bottles that cost, per ounce, more than sterling silver.  Needs like the upgraded account to Hulu so he doesn’t have to watch commercials during episodes of incomprehensible Anime.

So, approximately 12 years after I first responded “get a job” to his request for something or another, he actually got a job.  This is his first work day.  He’s working from 4-9pm, standing on the side of the road wearing an Uncle Sam costume and twirling a sign. He was hired to be a “sign twirler.” We have since dubbed him a “human positional advertisement.”

He was excited to get the job.  He felt like a responsible person, taking control over his life and feeling the pride of working for what you have.  He counted the money he’d make ($7.25 x 5 is $36.50, so after taxes, that’s probably $30.00 which means I could buy……….) and couldn’t wait until it was time to twirl.

So he showed up at the appointed time, an eager, enthusiastic first time employee.  He changed into his costume and went to work.

To be fair, this is the coldest it has been for a while, and there are only so many layers you can fit beneath the costume.  And it is boring as all get out, standing there for hours on end trying to look cheery while people give you pitying looks from inside their warm cars.  It isn’t intellectually taxing work. The only skill you need is the ability to stand upright and not accidentally dart into traffic just to end the tedium. Still, it is honest work, it is productive work, and I am hopeful that it will renew his desire to stay in school as long as humanly possible.

I brought him some hot coffee, not so much because I was responding to his pitiful, whining text messages, but more because I wanted to see him and revel in the fact that, for the first time in over 15 years, I was at rest and he was working.  Ha.  Ha-freaking-ha.

There is a sandwich shop within walking distance of his designated twirling spot, and he begged for a sandwich.  Given that it was dinner time, and that one of my primary roles as his parent is to see that he is fed often enough to keep Child Protective Services at bay, I walked over and got a sandwich.  I paid $7 and change for a foot long sandwich with no drink or chips.  It occurred to me that it would take him more than an hour of standing on the side of the road in 45 degree weather if he were to pay for it himself. I told him this when I gave it to him.

He stood stock still for a moment, absorbing that information.  “That’s sad,” he said.  “That’s really sad.”  He thought some more.  “How do people…?” He didn’t finish his question.

I didn’t have much of an answer, because I have no idea how people do.  I thank my maker every day that I don’t have to know.

I guess my son thought I’d stay and keep him company some, judging from the disappointed look on his face as I got into my late model sedan with the heated seats to go home and do nothing productive for a few hours.  But I’ve paid my dues and I have no interest in overpaying.  I worked at Burger King for a few weeks as a teenager.  It was a horrible job, smelly and greasy and exhausting.  I hated every second of it.  I also worked as a cashier in a busy bakery, standing on my feet for eight hours at a time while rude customers barked orders at me. I took to wearing a cap that said, “please say please,” which had exactly zero effect on anyone except to cheese off my manager.

Every teenager should have a service job.  It makes you a better customer and a better person.  You can’t start out at the top, and some people never get there.  If you haven’t spent time in the trenches, how can you know what it’s like in a trench?

So I’m glad my Buddy’s in a trench, as uncomfortable as it may be. I feel sorry for him, but I’m happy for the education he’s getting.  And I have a feeling he’s going to like that thirty dollars. Probably enough to do it again.

Get a Job, Kid

Get a Job, Kid