Of the myriad of stupid ways in which I am likely to eventually die, refusal to go to the doctor because I think the doctor might think I’m just a whiner baby is up there on the list.  Honestly, I don’t know why I care so much.  I’m sure no one at the doctor’s office does.  They get paid either way, and if there’s nothing wrong with me, they don’t have to do much.

Of course, because of this stupid policy of mine I don’t tend to go to the doctor until things are really, really bad, and so I have never gone once when they said there was nothing wrong with me.

Two days ago, my left foot (these things always happen to my left side – my left wrist broke, my left foot had a bunion, my left eye had a cataract) started swelling like I was nine months pregnant.  Some might argue that my belly did the same, but that was a long time coming, and was traceable to several years worth of desk jobs, meals-on-the-go, and Dairy Queen Dilly Bars.  The foot was sudden.  The feeling was somewhat familiar.  I remember my tootsies being so swollen while pregnant with my daughter that the only shoes I could fit on my fat little feet belonged to my husband.  When I walked, the liquid in them sloshed, and you could see waves of fluid crashing over the top.  It was gross and uncomfortable, but worth it when you see how smart and kind and funny and beautiful my daughter is.

This, however, was not the result of a pregnancy, and was sudden onset and very uncomfortable.  The skin felt stretched and sore.  The next day, every time I took a step it felt like someone was digging their elbow into the top of my foot.  I imagined the worst – foot cancer, blood clots, flesh eating virus eating me from the inside out – but knew it was probably nothing.

So I checked with my source of medical pooh-poohery, my friend Diane, who is most famous for telling her son to suck it up and wrap his broken hand in an Ace bandage before finally relenting and taking him to the doctor five days later.  I figured if Diane thought I should go to the doctor, it was probably sound advice.

Dr. Diane diagnosed me with a hairline fracture and said I should go to the Orthopedic Urgent Care clinic and get a boot to walk around in for a few weeks.

With her hard-to-get blessing, I went to the clinic.  They took me in to x-ray my foot, and I felt the need to justify my being there.  I blathered on to the x-ray technician.  “It’s just weird, it doesn’t hurt that badly, just in a way I’ve never hurt before, so I thought I’d get it checked out, it’s probably nothing, but look, it is swollen, it looks weird and gross, see?  My other foot doesn’t look like that.”  I looked down, and worried that maybe my other foot did look like that.  I don’t have pretty feet.  I have large slabs of meatloaf with little stubby piggy toes.

The technician kindly humored me, and took pictures from all angles, then shuffled me into a room to await the verdict.  I sat there, with my foot not hurting at all because I was sitting still, feeling like a fool for being there at all.

Finally, the P.A. came in, and told me that the x-rays looked fine, but they could see the swelling on the x-rays. (Yes!  Justified!)   She said I probably had something called “metatarsalgia” which is a word that trips so poorly off the tongue that I have to say it with a space between all the syllables.  It means that the heads of the bones in the front of my foot, just before my toes, are inflamed, probably for no reason at all, although it could be from a whole lot of running, which I assure you in my personal case it could not be.  Although it is probably overkill, the best way to get rid of it is to walk around in a boot for a couple few weeks and rest it as much as possible. 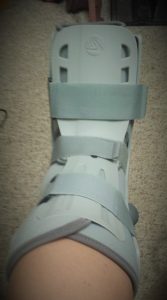 es I think these things are God’s way of telling me to slow down.

I’m not that thrilled with the comfort of the boot, nor with the boot as a fashion statement.  It is approximately 763 degrees in the shade here in Georgia in June, and there is some serious rankness that goes along with wearing a padded boot and a long sock in this kind of weather.

Still, the boot is a great big physical manifestation of the fact that there is indeed something (physically) wrong with me, and I’m not just a whiner baby.  About this, anyway.
Don’t miss anything! Sign up below for bi-weekly(ish) emails with exclusive content.