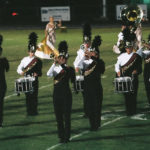 This is fall and this is the deepest part of the deep south, and that means that it is football season.  People only get a little excited around here about pro football, but love of a college team will forge (or break) friendships, and Friday night means heading out to the local high school stadium, whether or not you have a kid that goes to the high school, or you went to that high school, or have any connection to that high school beyond a geographic location.

To me, however, and to many other kids, past, present, and future, the fall will always mean marching season.  No, this blog is not an ode to the heroes who get sung at every pep rally and school dance.  This is an ode to the unsung heroes, the ones who actually prompt the singing: the marching band.

Let me announce my marching band creds: I marched in high school and in college.  In high school, I marched because if you wanted to be in the concert band, which I did, you had to march.  In college, I marched because, as a student at Duke University during the glory days of Christian Laettner and Bobby Hurley and Grant Hill, I wanted front row seats to every basketball game, and you couldn’t be in the pep band without being in the marching band.  I never particularly liked marching.  But I liked playing with a band, and my marching band friends are still my friends to this day.

Make no bones about it, marching is work.  Make fun of that tuba player, why don’t you, and while you’re at it, lift that enormous metal thing heating up in the sun, and carry it around while playing memorized music and moving in precise maneuvers that, if done incorrectly, could result in a truly embarrassing and YouTube worthy pile of humanity and musical instruments.  Now do it while wearing a polyester thermos-like uniform (keeps the hot things hot and the cool things cool!) and a hat with a giant feather sticking out of it.

These kids work hard, a lot harder than I did in my day.  Marching band camp is grueling 12 hour days full of non-stop movement.  Practices are out in the Georgia August heat in the worst part of the day.  The field is assigned to the ‘real’ athletes during the time when the sun isn’t directly overhead and when it hasn’t spent a whole day making the asphalt into the LaBrea Parking Lot.  The only time the band can practice without interrupting anyone else is under a blazing sun that has already worn out its welcome.

I get that people are there for the game.  I get that parts of the game make you want to stand up and scream, and that the suspense of the game is the fun of it all.  I get that you don’t want to run to the snack bar for nachos with plastic cheese and a snout-and-entrail laden hot dog during the game because you might miss something huge.  You can’t pause live games, and there won’t be seventy jillion replays like there is on tv.  It won’t come up later on ESPN.  That huge interception, that touchdown run, that miracle catch – if you don’t see it live, you ain’t going to see it.  So I get why you save your potty breaks and snack breaks during the breaks in football.  I get that you wouldn’t be there at all if it were just a marching band showcase.

Just remember.  Those student athletes with the shoulder pads aren’t the only ones out there performing.  The band worked hard to bring you that halftime show.  Pay attention to it, even if it is just out of politeness.  Clap for them.  Cheer for them.  Say ‘good job’ to the kid carrying a saxophone out of the stands at the end of the game even if you didn’t actually pay attention to him playing.  He won’t know.  He’ll just hear the compliment.

And when you hear that drum line echoing off the stands, know that’s the sound of the Little Drummer Boys (and girls) proclaiming the gifts of football season.  GO RED DEVILS!

Ode to the Marching Band

Ode to the Marching Band