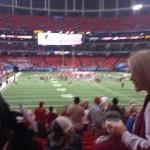 I had the opportunity to go to the Chik-Fil-A/Peach Bowl last week.  A friend of mine got tickets from a friend of hers, who got them from her husband, who got them from his company.  Since they were corporate seats, they were pretty stinking good, right behind the goal post, only 17 rows back.  We also go to go to the pregame festivities. I’m not a huge football fan and, in fact, I had no idea who was playing up until the time that my friend June asked me if I wanted to go.  (It was Florida State and Houston.)  There were extra tickets, so I called my friend Candi, who happens to be as insane a Florida State fan as I am a Duke fan, although probably more, since she actually knows the names of the football players, and I only really care about basketball.  Since I believe that sports are only fun if you care who wins, I decided to care about Florida State, since Candi did.  I wore garnet-colored pants and a black t-shirt and a gold scarf so I’d look the part.

The pregame festivities were fun.  Since we didn’t really care about the players much, while everyone else was watching them parade in and trying to get a good luck high five, June’s daughter Sydney and I prowled the vendor booths to get free swag while there was no line.  Syd, who was there more or less by protest, made a sign at the Home 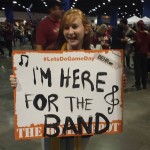 Depot booth which ended up getting her more attention than she bargained for.  Turned out a lot of people were also fans of the marching band but never thought to express it.  Sadly, her sign didn’t get us on the JumboTron or TV.

There was all kinds of great stuff to get.  Signs, foam footballs, beef jerky, towels, samples of frozen lemonade, green screen pictures, personalized Chik-Fil-A cows (man those Chik-Fil-A people are marketing geniuses), and double insulated cups, just to name a few.  Some were up for grabs, some you had to sign up for.  Truthfully, I didn’t need (or, in retrospect, want) any of it, but I got swept up in the grab.  In a weird way, I had a sudden understanding of what made people join in the looting.  Not that I was stealing.  People wanted me to take their branded and logo-ed stuff.

At the AT&T booth, they were giving away phone chargers.  Phone chargers are at a premium in my house.  They get lost as often as socks in the dryer and broken as often as politician’s promises.  To get one, you had to post a video on any kind of social media with the hashtag #PeachBowlATT.  Since I had no video at my immediate disposal, I quickly filmed one and posted it, and collected my gen-you-wine AT&T phone charger.  I have since looked at the video, and a saner person would have taken it down by now.  Instead, I post the link here, and promise you that in this video I am stone cold sober, as it was taken at approximately 9:15 in the morning.

Of course, not everyone there was stone cold sober at 9:15 a.m.  I was truly surprised by the line at the beer carts.

The game was fun, though the ‘Noles, who I loved passionately for an entire afternoon, lost.  Behind us were the two most rabid Houston Cougar fans imaginable, one of whom had one of those great big booming baritone voices.  He was entirely tone deaf, but sang the fight song every time the pep band played it.  He spoke to the players like they could hear him and as if without his encouragement they might give up.  “Yes SIR, yes SIR, that’s what you need to be doing, we’ll give him that one.”  When he couldn’t think of anything else, but there was too much fan-fueled energy to remain silent he yelled something that sounded like “cooooooDOOOWWWW!”  It wasn’t until the third quarter that I figured out it was “Coug’s House!”

All in all, it was a fun game.  I paid $5 for some stale popcorn, $10 for a ‘personal pan pizza’ the size of a dessert plate, and $4 for bottled tap water.  And yeah, even the bands were awesome.  I was proud to be sitting with their biggest fan.