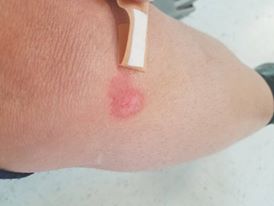 Sometime in late October, I fell out of my car.  I have a thousand excuses, none of them particularly good, including “there was stuff in my hands so I couldn’t use my arms to balance” and “I parked on uneven turf, making the way out unpredictable.”  I promise you I was sober as the Judge I am four days a month, and no, the car was not moving. It all comes down to my having the physical grace of a hippo trying to pull off jazz hands in a minefield.  I was wearing sandals, and caught my little baby toe on my left foot on the door frame on the way out. Which ended up also being the way down.  Like always, I was in a hurry, and didn’t stop to assess the damage.

Until after I got home.  At home, I took a step out of the car into my nice, level garage floor and it felt like I had stepped on live charcoal.  I got inside and inspected my foot.  It was nasty.  Deformed, purplish-black, and looking more or less like it belonged in a leper colony, it was clearly damaged.

Still, I thought, it’s a toe.  What are they going to do?  So I taped it up and went about my business.

More than a month later, it still hurt like the fire of a thousand suns if I stepped on it incorrectly.  I mean, honestly, I have better things to do in my life than deal with a stupid little baby toe, so I kept popping Motrins and taping it up and figuring it would eventually heal itself.  After the swelling went down enough for me to notice a little bump on the inside that felt like a bone poking in the wrong direction, I went to the podiatrist. After an x-ray, it was announced that I had broken the little baby toe clean in half, and it was never going to get better so long as I kept walking on it without immobilizing it.

Enter the boot, the same boot I wore when I last had metatarsalgia, because why not*.

And it was on that boot that I strolled into Luke McFarland’s grant-fueled writing class at Morgan County Middle School.  I was actually invited as a sort of show and tell entity, the real life version of what they had been learning about.  Picture the shaky educational film narrator’s voice saying, “Here is the elusive North American Drivel Writer, come out of her habitat to find a decent gas station in which to refill her coffee cup with writer fuel…see how her eyes dart independently from side to side as she…” and then the film breaks with that flip flip flip noise you can only hear in your head if you are over forty.

Anyway, because of the gas station coffee, I had to go to the little girls’ room, and I asked one of the girls in the room where it was.  She pointed next door.  The school architect, from the firm of Goebbels & Goehring**,  placed the girls’ bathroom approximately 2 ¾ inches higher than the hallway, and tiled the elevated step with a special light deflecting tile that makes it impossible to see that it is a step.  I lifted my foot in the traditional manner, intending to place it on solid ground in front of me and make my way to the facilities.

Instead of moving forward in the expected manner, the toe of my jackbooted foot caught on the lip of the step and I fell, face first, into the girls’ bathroom of Morgan County Middle School, sliding forward about three feet before gliding to a stop like a curling stone, only without all those pesky aerodynamics and with fifty years worth of accumulated ammonia and middle school girl shoe droppings instead of freshly swept ice in front of me.

I did my business, disinfected my entire body as best as I could in a bathroom with precious little soap and no paper towels, and went back into the classroom.  I immediately told on myself which, I have to say, is an excellent ice breaker if you ever need to win the attention of a passel of 14 year olds.  One sweet girl asked if I was hurt***.  I said, “I think my knee is bleeding.”  I pulled up the leg of my pants and it wasn’t so much bleeding as weeping, but the skin was definitely missing, probably ground into the fabric of my pants.  Another girl got me a Band-Aid from the class collection.  One boy, whose name is only a few letters shy of a celebrity crush I had when I was his age, thinking he was oh-so-funny said, “You’re as agile as a cat with rollerskates, aren’t you?”  Ha-ha, I thought.  Mr. Cool Guy thinks he’s so awesome.  Well, guess what?  I’m not the same girl I was when I was 14 – I’m not afraid to own the awkward for a good laugh.  “Rollerblades,”  I said. “On a freshly oiled bowling lane. Being chased by a three-legged golden retriever.”

Another boy, after offering me some of his Fuego Takis (which I refused) and part of his Reese’s Pieces Peanut Butter Cup Super Candy (which I most whole heartedly did NOT refuse) asked if I’d write about this incident and, when I said of course I would, he asked if I’d talk about him specifically.  And so I am.  Did.  Am****.

I was there to talk about writing, and I suppose I taught them all the best writing lesson I know: It’s all material, even when, or maybe even especially when, your middle school nightmares come true.

*Upon seeing my boot, my daughter put her hand on her hip and said, “Mom.  That happened over a month ago. You are supposed to be taking care of me.  How can you do that if you won’t take care of yourself?”  Sometimes she’s wiser than she knows.

***The boys were just laughing.  I didn’t blame them.  It was funny.

Don’t miss anything! Sign up below for spam free hilarity and a FREE copy of Lori’s e-book “Telling Your Story: 7 Writing Prompts to Get You Started.