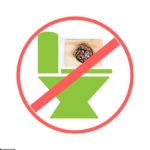 One of the most interesting things about being a parent is how often you find yourself saying things that you never thought you’d say.  There are plenty of sentences that have flown out of my mouth using common words with simple definitions that have never quite been put in that order before.
The other day, for example, I had occasion to say this, “Why is there a half a salad on the bathroom floor?”
I mean, seriously.  Why was there a half of a salad on the bathroom floor?   Who brings salads into the bathroom in the first place?
I don’t always, or even often, go into my kids’ bathroom.  There’s weird teenage stuff in there and it’s kinda gross.  I’ve tried to teach them self-reliance* by forcing them to clean it up themselves, but it turns out that when left to their own devices they don’t mind mold and mildew all that much, especially when the smell of it is covered up by an ozone threatening cloud of Axe deodorant spray.  When I tell them to clean the bathroom, they might straighten up their stuff** and they might take a swipe with a damp paper towel at the middle of the sink bowl, but that’s where the ‘cleaning’ ends.  There are still questionable tissues and bandaid wrappers on the floor, and Q-Tips in odd places.
Every once in a while the musty smell drifts down the hallway and I am home long enough to do something about it, and I make an attempt to clean it. Such was the day that I wandered in and found a half eaten salad from Wendy’s.
My first thought was my son, since he is infinitely more likely to actually eat a salad voluntarily, but he denied it. I knocked on my daughter’s door to get her take on the matter, expecting her to deny it, too.  But she didn’t.  She had been at the mall with her friends*** and hadn’t finished her salad so she brought it home, only when she got home she had to ‘go’ so she immediately headed to the bathroom without passing “Go” or collecting $200.  And then promptly forgot all about the salad she left in a bag on the bathroom floor, which she had to step over to get out of the bathroom.
Would you believe that I had to tell her more than once to get the salad out of the bathroom?  I mean, who would have guessed that you had to be taught that half eaten fast food salads do not belong on a bathroom floor?  That was not addressed in “What to Expect While You’re Expecting.”
I went and did something else, and later saw the salad in the kitchen trash can.  I went back in the bathroom to do something about the cat-sized hairballs rolling around on the floor, and saw that my precious little angel baby daughter had removed the salad from the Wendy’s bag in order to throw it out. She left the Wendy’s bag along with a French fry container and a half-eaten chicken nugget on the floor.
I knocked on her door again, perhaps a tad more aggressively than the first time.
“Did you honestly think that I meant ‘take the salad out of the bag and leave the rest of your food on the bathroom floor?'”
She blinked at me with those giant blue eyes of hers that will ultimately be my downfall.  “Mom.  It’s not that big of a deal.”
“Are you kidding me?” It was all I could think to say.
“It’s just a bag!”
No, sweetheart.  No, heart of my heart, light in my eyes, love of my life.  It isn’t just a bag. It’s a visual and disgusting representation of all that I have failed to teach you about being considerate and thoughtful and, well, basic hygiene.  There is a half eaten chicken nugget on the floor of my bathroom placed there by someone who is taller than me and who has enough fine motor skills to get 2nd chair in the district honor band as a lowly 7th grader.  By someone who is attuned to the subtleties in meaning in emoji-choice by her friends’ text messages but somehow can’t see the steam shooting out of my ears.
Or maybe she’s just 13 and this, too, shall pass.
Not quickly enough, but it will pass.
Plus, when she’s 40, I can go to her house and put a piece of shrimp under a sofa cushion and just wait.  Revenge takes a while sometimes, it happens long after the salad course, but it is a great dessert.
*Remember this phrase, rookie parents.  Whenever you feel like being a slacker parent, make yourself feel better by telling yourself that you are teaching your children life skills like self-reliance and independence.  It’s all about spin.
**If you want to know how many neutral palettes of eyeshadow there are, you can come into my daughter’s bathroom and count them if you have a few hours to spare. She swears they are all different, but I’m like, “They’re all brown!” And she’s like, “Mooooooooooooooooooommmmmmmmmmmm” with that eyeroll that 13 year old girls are famous for. “This one has sparkle, and this one is matte, and this one is for highlighting, and this one is for………..” What. Freaking. Ever.  I buy one eyeshadow combo thingie a year IF I feel like splurging.
***I knew this.  I am not THAT much of a slacker parent.

If you enjoyed this and want to read more like it, visit Lori  on Twitter or on Facebook. For the Best of Lori, read her books, “Mismatched Shoes and Upside Down Pizza,” “The Armadillo, the Pickaxe, and the Laundry Basket,” and her latest release, the 2017 eLit Gold Medal winner for humor, “You Know I Love You Because You’re Still Alive.”

There’s a Salad in my Bathroom

There’s a Salad in my Bathroom