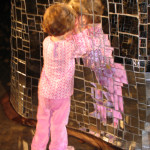 I’m old, but not so old that I am completely afraid of technology. I embrace it, for the most part, for all the things it can do for us, and the ways it can make things easier. One of the best things it can do for me is allow me to keep my big fat butt in my chair. I mean, it allows me to save gas and therefore money and the environment. It has nothing to do with how lazy I am. Nothing at all.

I’m not just talking about online shopping, my preferred retail method. I’ve edited documents in real time with people in France via Google Hangout. I regularly meet with Suzen from Omaginarium via Skype. We’ve never met in person, but we’ve met a lot, and I consider her a friend. I’ve called into group meetings before, but that’s usually a slog. You can’t tell who is talking, and it is easy to zone out and lose track of what is going on with no visual stimulus save Candy Crush on your cell phone. I don’t like phoning in meetings.

Recently, I ‘attended’ a meeting via an online meeting service There wasn’t much technical prowess required to attend this meeting. I clicked a link on an email and typed in my name. Then my face popped up on a screen along with everyone else’s. My face. My tired, day worn face. (It was a four o’clock meeting.) I tried to make myself go away, but the best I could figure out what to do was make my face small.  No matter what I did it looked like I was being reflected in a fun house mirror.

I couldn’t get the angle right. The only way I could prop my laptop on my desk so the webcam could see me was at an angle that highlighted the multitude of chins underneath my jawline. My slack face, my resting face, looks angry at best, but if I smiled, I looked like a grinning idiot smiling for no reason than the sheer joy of sitting through a two hour meeting. But if I didn’t, my mouth formed an upside down semicircle, kind of like Beaker’s from the Muppets. I prefer to think of it as rainbow shaped rather than frowny shaped. My eyes are small under the best of circumstances. Looking down towards the screen of my laptop, they look closed, as if I were sleeping. If I deliberately opened them, I look liked Jack Nicholson in the Shining.

To top it off, I thought this was a call-in meeting when I sat down. So I had already changed into my gym clothes. Everyone else was still dressed like a responsible grownup with ties and suit jackets and whatnot. I was wearing a Chik-Fil-A Bowl T-Shirt from 2013. I thought about changing back, but then everyone would have seen me.

Sometimes I took a swig from my water bottle. If I saw the action echoed on the screen, I cringed with my lack of grace. In my twisted brain, I saw a dopey St. Bernard lapping up water and then slobbering all over the sofa. My nose itched, and I was afraid to scratch it for fear someone would misinterpret the gesture.

I wasn’t sure where to look. My instinct was to look at the person who was talking, even though they couldn’t tell that I was trying to make virtual eye contact. Some people didn’t have webcams, so you couldn’t see them, only hear them and a little bubble would pop up to tell you who was talking. When they were talking, it seemed rude to stare at the screen, which meant directly looking at other people who are also listening to the speaker. I wouldn’t do that in real life, but what else was I supposed to do? If I looked at something else in my office then my face went drifting off on the screen and everyone could see it. So, if I looked at anyone else I felt like a stalker. If I looked at my own face, well, yuck.

This was a complete distraction. This is a very serious meeting that I am attending, and this was a very functional, efficient, cost-effective, and time saving way to attend it. It is my own problem that I was having trouble focusing on the content, because every time I glanced at myself inadvertently during a discussion I thought “woof” instead of, “how does this compare to fiscal year 2014?” which would have been a more on-topic thought to have had.

This was a group of relatively high powered people with impressive titles at the top of their professions. We were in this meeting because of our supposed ability to make intellectual contributions. No one gave a rat’s patootie if my mascara was sliding down my cheek or the shape of my eyebrows three weeks after the latest waxing. Odds are, no one but me noticed that I was wearing a t-shirt, since you can only see the top of my shoulders. Odds are, if they were concerned with anything, it was their own web-cam distorted faces on display. I was not asked to be a part of this meeting because of my good looks or ability to dress myself. So why was I obsessed with this? Why was I more worried about looking unattractive than saying something stupid?   I wasn’t at all worried about what I had to say. If I had attended the meeting in person, I would have been completely unaware of my physical self and, while my mind might have wandered during the more boring bits, I wouldn’t have been obsessing about my looks. Then again, in person I don’t have to look at me the whole time, either.

I could guess a thousand reasons why this is, none of which matter, because the bottom line is that I am well aware that my priorities are absolutely out of whack. In this context, what’s on the inside is the only thing that matters. And what’s on the outside isn’t half as bad as the insecure eleven year old stuck inside me thinks. So why can’t I make her go back to middle school where she belongs when I go out and play with the grownups?

You figure it out, you let me know.