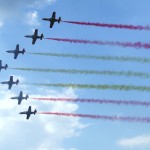 I went to visit my parents in Ft. Myers, Florida, largely because I found an unbelievably cheap round trip flight. Of course, the “Student Driver” sticker on the plane explained the price just a little bit, as did the $50 million per carry-on bag fee.

Every time I leave the house at 4 a.m., which is thankfully not often, I am always surprised that I’m not the only car on the road. Where are all those people going at such a ridiculous time? Due to the distinct lack of 24 hour establishments in my neighborhood, they can’t be running errands, unless “Pick up pecan waffles at Waffle House” can be counted as an errand. Shift workers usually start an early shift at 7 a.m. I’d think about it some more, but I need some high test coffee in a 55 gallon drum.

I parked in the Park ‘n’ Drive lot (the ‘a’ and ‘d’ are removed for your convenience) and got on the shuttle bus to take me to the airport proper. Atlanta Hartsfield-(Latoya) Jackson Airport is one of the busiest airports in the world, mainly due to the fact that it is the only substantial airport in the entire state of Georgia, which is itself the largest state East of the Mississippi. Every other major city has at least two major feeder airports (Washington DC has Dulles and Reagan; Chicago has Midway and O’Hare; New York has JFK, LaGuardia, AND Newark; etc.) but not Atlanta. The result is a sprawling complex, relatively new and comfortable, with restaurants and shopping and escelators that go up so high they vanish into the distance.

At 5 o’clock in the morning on the shuttle bus, there were a few collegiate looking people, a few business looking people, me, and a family of four with two young children. The family of four did 100% of the talking on the shuttle bus, including but not limited to a 10 minute conversation about whether or not a two year old boy was going to finish eating his “nana.” (As I type this, I realize it looks like the kid was trying to eat his grandmother: I promise you it looked like a standard issue banana.)

Once at the airport, while standing on line for the kiosk, I looked at my phone for the first time in the morning, and saw an email letting me know that my flight had a four hour delay, but I should get to the airport at the regular time anyway. I looked up at the departures board, and it said my flight was on time. I didn’t know who to believe.

It was a relatively uneventful trip through security, the highlight of which was a disgruntled TSA worker, clearly tired of the sheep-like nature of the people on the lines she was herding, who loudly tried to convince people that there was a better way. “I promise you there are two lines here. Some of you really can go to the left. That’s right, go around all these people who won’t get off the line on the right. Two lines here, then it splits into four around that post. I promise you that’s really a line.” “Baaaa,” said the sheeple, as they stayed on the right line. No government yahoo was going to tell THEM what to do.

Turned out the flight really was delayed four hours. There were a LOT of irate and sleepy people at the gate. For purposes of solidarity, I pretended to be irritated, too. But between you and me, I was secretly pleased. I was given a $7 food voucher. (At airport prices, this buys you a fun sized Snickers bar.) I was given a place to sit and no one to talk to, and the ability to crawl inside my head and clear

out some cobwebs. There was email to return, a million books on my Kindle, several articles already written in my head that needed transcribing, and some seriously high quality people watching.

There is no better place on Earth to people watch than a major airport. I played “where you do think they are going and why” with the voices in my head. I questioned some fashion choices, including why any woman would wear heels in order to walk down a hallway longer than most streets in metropolitan areas. I wondered if I was the only one who thought of Ferdinand the Bull every time she saw someone with a ring in the septum of his nose. I wondered how certain people got their hair to stay that way, and whether they did that on purpose. I smiled at little children and babies, and sympathized with their parents, who were schlepping car seats and trying to figure out how to use the restroom without any tiny little fingers touching anything irredeemably disgusting. (Been there, sister.) In the restroom, watching a line of women scrubbing their hands like surgeons, I wondered what their hygiene routines were like when no one was looking. It’s fun watching old men try to figure out how to use their smart phones to entertain themselves when they finish the paper. I also found the time to bemoan my ridiculously short shins that require me to lift my heels in order to get my lap flat enough to balance a laptop on.

I am sad that I have four fewer hours with which to spend with my parents. I love them dearly and I know that, at the ripe old age of 45, that I am in the lucky minority to have both of them not only alive but married to each other. But if I had to lose four hours, this wasn’t the worst way to do it.