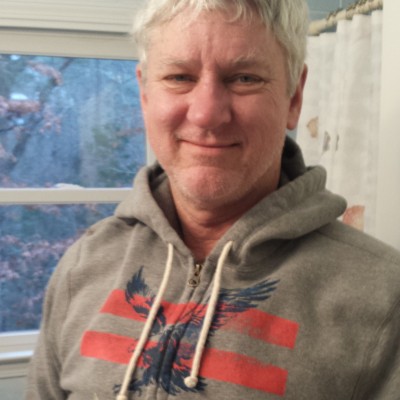 We had been shopping at the Outlet Mall earlier in the day, and my unsupervised husband, Mike, found himself alone in American Eagle ™.  Apparently he forgot that he is approximately forty years too old to shop in that store.  He bought himself a clearance hoodie, complete with the logo emblazoned on the front, and wore it the rest of the day, much to the abject horror of the teenagers in my home. 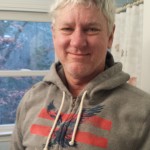 He was still wearing the hoodie when he went down into the basement to fill up the base of a freestanding punching bag with water for my daughter to both practice her karate and release her frustrations that she is stuck living with the most ridiculous parents and brother on the planet.  To hear her say it, anyway.

There was some old, grody water left over in the base of the punching bag stand, and Mike drug it over to the basement door and tipped it to let it out in the grass.  Something tipped a little too far, and his feet found themselves north of his hips.  He managed to fall in the grass instead of the concrete floor in the basement, and the only injuries were to pride and the American Eagle hoodie, which ended up covered in mud.

By this time it was about 11 at night, the time at which I am floating off to enjoy one of my three recurring dreams, and Mike gets his one and only burst of energy for the day.  I was just about to finish a chapter in my book and put it to the side when I heard a loud flurry of words I wish my children didn’t hear.  I said a quiet little prayer that they had snuck their iPods into their room and were listening to 5 Seconds of Summer or Lindsey Stirling through their earbuds.

“Are you ok?”  I shouted, warm under the flannel sheets and hoping to not have to get out and ruin the body heated pocket of snuggliness I created under the covers.

“Yeah,” said my husband, and I turned back to my book.  Not two minutes later he said, “Lori!  Please!  It’s an emergency!”

I flung aside the covers and braved the cold to see what was the matter.  Before I got down the hallway I heard, “I flooded the laundry room.  I need you to go in the basement and see if the water is coming through the ceiling.”

I ran back to my room to get house shoes and went into the basement, followed rather quickly by my son, who wasn’t smart enough to put on shoes first.  I could hear it before I saw it, the waterfall coming through the floor, across the joists, collecting on the pipes and dripping on to the random detritus in the basement.

That’s the thing about my basement.  You can’t just assume anything.  There might be a bag of trash sitting on top of a suitcase full of tax returns; in a bag that seems like it is full of junk mail and old phone books, there might also be a car title.   This happens because my husband has a tendency to ‘clean’ by sweeping out-of-place things into a bag or box and hiding it in the basement, never to be touched again.  So you need to be careful.  Underneath the deluge was a pile of boxes and bags that could have been filed with the original Magna Carta, Chinese take-out menus from restaurants that are no longer in business, savings bonds, mouse turds, and somebody’s will.  It was important to rescue them all.

I found an old cat litter bucket (we haven’t had a cat since 2002) and put it underneath the majority of the rainfall, and my son and I began moving boxes and bags into the dry zone.  Mike flung some old towels down the basement steps, and I mopped up as best I could.  Mike took a break from mopping the laundry room to see the damage downstairs.  We swapped places then, and I took on the mopping duties in the laundry room.  My son stood outside the laundry room trying to gauge my mood.  “This is funny, right?”

“It will be tomorrow,” I said.

It didn’t take too long to soak up and relocate enough water that it was no longer pouring through the floor.  Mike and I took a break from mopping and hauling and I asked the Sixty-Four Thousand Dollar question: how exactly did he flood the laundry room?

It was all the hoodie’s fault.  There was mud on the new hoodie, and this Would Not Do.  Since it was new, Mike actually read the laundry care label, and learned he should wash it on cold.  Before he did that, however, he wanted to rinse the mud off.  So he put it in the laundry sink and turned on the water.  And walked away.  And forgot the water was on.

Jacob tried to convince Mike that this was God, or karma, or the universe, or whoever is in charge of such things, telling Mike that wearing an American Eagle ™ hoodie designed for a 15 year old when you are old enough to get the senior discount at the grocery store is a terrible idea.

“I like that sweatshirt,” Mike said, refusing to call it a hoodie.  “It’s comfortable and it fits.”

Jacob just shook his head.  It’s an old cliché for a reason: you really can’t teach an old dog new tricks.  Or much of anything else, either.