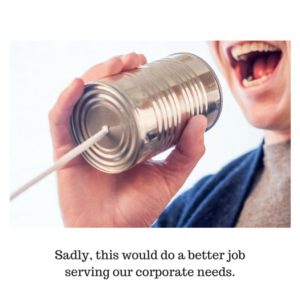 So, when we discovered that for reasons unknown our calls from the Gwinnett County Jail were being blocked, it was a Big Deal.  We had been getting calls for years.  Suddenly they stopped.  Complaints were made to scary sounding regulatory governing bodies.  It was a Real Problem.

So we, and by we I mean the wonderful ladies in the front office, called our phone company, which goes by a corporate name which rhymes with Hay-B&B.  After being placed on hold and given the runaround for near to an hour, they were told that this could only be accomplished via the website.  The website proved itself inaccessible.  We logged in, and it said we could go no further unless we updated our security question.  It did not, however, provide a means to update our security question or go to any other part of the website without logging back off.

At this point I was called in.  I am what passes for the IT department in our office.  Not because I have any particular computer skills, but because I am unafraid to just click on stuff until I get it to work.  They were correct.  There was no way to go further.  I clicked on other Hay-B&B websites until I found an online chat. I chatted for a while with ‘Arnold.*’  I explained the problem, and he said he was not the right guy, and he gave me to Sandra.  I gave Sandra my info and passcode, and after an insane amount of time she determined that she was residential support, and she needed to give me to business support, so she was going to go bye-bye and have them call me.  This is not my first rodeo, not my first flea circus, and certainly not my first dance at the ball, so I would not let her go without giving me a non-generic phone number for me to call when they did not call me back.  She refused. Eventually, I got so annoying that she had her supervisor call me, and as soon as the phone rang she disconnected the chat.

The conversation with the supervisor lasted 10 seconds and consisted of him telling me that he was the wrong department and he was transferring me.

Forty-eight minutes (I timed it) after Sandra disconnected the internet chat, I spoke with “Sammy.”  Sammy tried to be helpful, but I had some difficulty understanding his accent.  He finally determined that while he probably was in the right department, he could not help me because the entire Hay-B&B website was being upgraded, and no one could do jack squiddly (my phrase, not his) until the upgrade was finished.  I asked him why Hay-B&B thought that 2pm on a Monday afternoon was the best time to upgrade instead of 2am.  He took the question as rhetorical, and promised to call me back when it was resolved.

Eventually, summoning up all my persuasive lawyer skills and my ‘mean mommy’ arts of convincing reluctant people to do stuff, I got him to give me a fairly specific phone number, told to choose option “4,” and given a job number.

While all of this was going on, there were many many dead minutes while I was put on hold, presumably so Sammy and his ilk could hang around the water cooler and discuss the latest season of Orange is the New Black.  I blew off a little steam by Tweeting about my dissatisfaction with the Hay-B&B customer no-service.  I discovered that an account called Hay-B&B Cares was really eager to solve my problem and begging me to private message them my contact info so they could call me and fix it.  I did.  They didn’t.  Mmmmmmmmhmmmmmmm.

Naturally, Sammy didn’t call me back, nor did Hay-B&B Cares.  Someone from Hay-B&B called my cell phone later in the evening, and when I answered, there was no noise.  No static, no broken connection, just silence.  I let it go for a minute and a half, intermittently yelling, “Hello!” and then said in the snottiest tone I could muster, “If you are recording this, I know for sure you are just making this call so you could say you tried to call and couldn’t make a connection.”

The next morning, I called the number Sammy gave me, and got connected somewhat quickly to “Joel.”  Joel took his time to read the voluminous notes in my ‘file’ and then said, “Use the business line and dial *80.”  I did, and got a voice recording that said, “Call block has now been de-activated.”  Joel was even willing to stay on the phone long enough with me to get someone from the jail to test it.

I wish I could say that the solution was not nearly that simple.  But it was.  And it took two and a half hours of my time, and contact with no less than 9 Hay-B&B employees using three different methods of communication (phone, internet chat, and Twitter) to come up with that.  Talk about customer no-service.

Joel, my man, you are a hero.  I don’t know what your real name is, or who your supervisor is, but you seem to be the only person connected with the whole Hay-B&B operation with any common sense, and I hope you get a big fat bonus check for your efforts.  If you ever find yourself in the Western Hemisphere, I promise to buy you lunch. And maybe a car.  I’m that grateful.

*Not his real name.  None of the names are the real names, though they are the names they gave me.  I’m just assuming they are not real names.

If you enjoyed this and want Lori to write for you, click on her Expert Ghost Writer page.  Also, visit Lori  on Twitter or on Facebook. For the Best of Lori, read her books, “Mismatched Shoes and Upside Down Pizza,”  “The Armadillo, the Pickaxe, and the Laundry Basket,” and her latest release, the 2017eLit Gold Medal winner “You Know I Love You Because You’re Still Alive.”