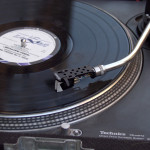 Everything old is new again, they say, and just like you can actually find legwarmers for sale, and real live fashionable teenagers wearing them, other 80s things are making a comeback.

After we decided that earrings were a no-go for my son’s birthday (click here to read more about that parenting dilemma) he decided he wanted an old school turntable to play records on, not that he owned any records, but he heard that records sound better, and some artists are releasing albums on vinyl and he wants to get them. What comes around keeps on going around, mostly at 33 1/3 rpm.  Ha ha.

So, I bought him a turntable.  I bought him one with USB ports and auxiliary doodads so he could hook it up to his iPhone or computer or whatever, and theoretically you can copy the tracks somehow, which I thought might be useful.  I gave it to him the morning of his birthday, and he was excited, even if he didn’t have any records to play.

On his request, I went into the basement and did an archeological expedition in the vast strata of detritus in order to find my old record collection.  I grabbed a handful, including some 45s, and brought them upstairs.

My son is a teenager, 5’9”, with a very low voice, and he looks very manly.  Therefore, I forget that there are some things I consider basic that he didn’t know how to do.

When my children were babies and I was new to this whole mothering thing, I was shocked to find out how much they didn’t know.  That was one of my favorite parts of parenting, watching these little fleshy lumps become fully formed people who could, with my instruction, drink from a straw, use a spoon, and find their own toes on command.  When my son was six weeks old, he got a cold.  He wasn’t terribly sick, as far as illness goes, but his little body wasn’t equipped to handle a stuffy nose.  He had no idea that he could breathe through his mouth on purpose, and didn’t have the find motor control to sniff or blow his nose on command.  So he would try to breathe through his nose, find himself unable to breathe, panic, and then cry, which made him breathe through his mouth.  He’d realize he was breathing again, settle down, then close his mouth, make a weird snuffling sound as he tried to breathe through his nose, and then the cycle would repeat.  I’m the kind of mean parent that thought it was hilarious and videotaped it, but I used the booger sucker thing as best I could, and somehow he lived another fourteen plus years.

That’s what I thought of when I handed Jacob my vintage Duran Duran “Rio” record and he looked at it, and then the turntable, and had no idea how to put the two of them together to make music.  I told him to put the hole in the record on the pokey thing, which he did fairly easily.  He didn’t know what to do next, and I found myself explaining the concept of the spiral and the needle and how the whole trick was to not make that skrrrrritch sound because that would scratch the record, and I’ve managed to go since 1982 without scratching up “Hungry Like the Wolf” and I might be justified in killing him if he did it now.

By the way?  Turns out that vintage copies of Rio are only worth about 5 bucks on EBay.  I guess most 80s girls kept theirs and there are a lot on the market.

Also?  Pink Floyd’s “The Wall” is just moody and depressing.

I explained that going all the way to the record store and buying 45s was what we did instead of instantly downloading singles from iTunes when a song came out.  I explained that I was not to be judged by my collection of 45s, which included Phil Collins’ “Against All Odds” and “Let’s Hear It For The Boy” by Deniece Williams, but rather to be applauded for having one of those plastic thingies you needed to fit a 45 on the spindle still wedged firmly in a record.

He also learned that playing a 33 record at 45 speed and vice versa is good for a few laughs.

I learned that “Footloose” still makes me want to dance.  And that my dancing is a different kind of embarrassing than it was in 1984.  Also, I care less, and danced anyway, even under threat of a video being posted on the internet.  You can’t shame me.  I’m a mom.

And turns out?  My son actually liked some of my records and I hear him listening to them when I am not in the room.

We did know how to have fun back then, and music is still music and can still move us together, even if we are decades apart.