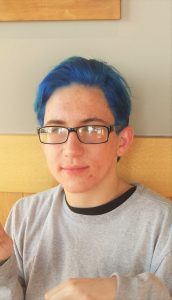 My hall bathroom looks like someone tasted the rainbow and it didn’t agree with them.  Pink, blue, green, bleach and black stains have seeped into the marble and tile and long outlasted the hair for which the colors were originally intended.

Both of my children, the boychild and the girlchild, have decided that the color of hair growing out of their heads, a color best described as “used coffee grounds” or maybe “topsoil,” a color which has served me well for the past 45 years, will not get them out of middle school with their popularity intact.

My daughter started in fourth grade, when I was declared the ONLY mother that did not allow her daughter to have a streak of pink in her hair.  I fought it for a short minute, eventually landing on, “it’s just hair, and the worst thing that happens is a pixie cut.”  And the beat went on, in multiple vibrant shades.  To paraphrase Crystal Gayle, “And Don’t It Make My White Grout Bluuuuuuuuuuuuuue.”

My son, being your basic dude, didn’t color anything until recently, when he decided he’d try on ‘emo’ as a personality.  He dyed his hair jet black.  His sunny personality quickly faded the black, however, so he added blue, which only showed up when the sun shined on him directly.  Then he figured he’d bleach all that out and go, as he called it, “Draco Malfoy blonde.”  This resulted in a faded pinkish color he called, “raw chicken.”  He hid under a blanket for 18 hours until I got home with dye called, plainly, “brown.”  He then looked more or less exactly like he did $40 worth of drug store dye ago.

My daughter recently spent her allowance on an intense green dye chosen mainly because of the cuteness of the boy modeling the color on the box.  She bleached her purple out to prep, and now has a mass of hot pink curls with white blonde patches, and the occasional natural brown spot sticking out defiantly.  Her hair is fried and dry and crinkles when you touch it. I think she looks like someone off-kilter by a mile: someone Helena Bonham Carter would portray in a movie.  She thinks she looks awesome.

Eventually my son decided he’d try again, only he saved his money and let a professional bleach it and then dye it Cookie Monster blue.  The blue is fun, and between that and his height, I can spot him instantly in any crowd.

How did I get from “over my dead body” to “please just dye it a consistent green?”  It’s a safe rebellion, I suppose, supported by straight A’s and nary a detention between them.

Joke’s on them, though.  Thirty years from now, their kids will see these pictures.  I know.  I was their age in the 80s.