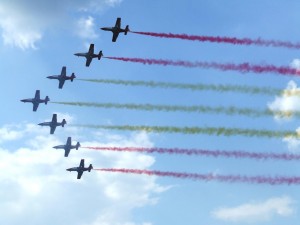 I had the recent, and sadly unfortunate experience of learning How to Fly Without a Driver’s License.

As you will recall from my last post, I lost my driver’s license as a direct result of the patriarchal male culture that keeps women suppressed by not sewing pockets into their clothing.

Ok, I’m just kidding about most of that sentence, but the truth is that when I got to the Dayton International Airport to fly home after the near-magical Erma Bombeck Writers Workshop, and I went to pull my driver’s license out of my jeans pocket, I couldn’t find it. I looked in the front pocket of my travel back pack, which is where I usually put all my purse-related items. It wasn’t there. I looked everywhere I could think of, and I couldn’t find it.

In a post-9/11 world, this is a real problem when you want to get on an airplane.

I dug through my wallet to see what was in there. I found my ID from the City of Loganville, where, believe it or not, they let me be the Municipal Court Judge. It had my picture on it, so I stepped forward to the front of the line and hoped for the best.

I spoke quickly, and all in one basic word. “IDon’tHaveMyDriver’sLicense. IDon’tKnowWhereItIsAndIDidn’tRealizeItWasMissingUntilTwoMinutesAgo. IDoHaveThisAndItIsGovernmentIssue. DoesItCount?” It tried to look as pitiable as a person can without holding an actual sad puppy.

Thankfully, I got the laugh I was going for, and the woman behind the counter said, “It should be ok, if you have something else with your name on it. Where’s your boarding pass?” I pulled out of my wallet three different credit cards, my library card, and my health insurance card. Then I looked in my left hand where my boarding passes, newly printed out from the electronic kiosk, should be. They weren’t there.

“I don’t know where my boarding pass is,” I said, trying hard to look like a person who could possibly hold the title of responsibility on the ID I was trying to pass of as mine. (It was mine. I am normally responsible. I promise!) I looked around at all the flat surfaces surrounding the place where I had my initial moment of driver’s license induced panic. Seriously. How far could this thing have gotten in the twenty feet I’d walked and three minutes since I printed it out?

“Do you need assistance to the gate?” Asked the woman behind the counter. She winked in an understanding, we’ve-all-had-these-days kind of way.

Eventually my boarding pass was located on a counter I swear I hadn’t stood at, the TSA/Homeland Security equivalent of “TOTAL LOSER” was written on it with a Sharpie, and I was pointed towards security. I was warned that I’d probably have to have “additional screening” but beyond that it should be ok.

When I got to the front of the line, there was a chain of people who yelled “Alternate ID” to each other like a fire brigade, and I was eventually passed to a very professional female security guard who unpacked my laptops from my backpack, and fed everything through the x-ray machine for me. Clearly someone who couldn’t find her driver’s license on the day she had to fly was not capable of such complex tasks.

I was brought over to a rubber mat and told, essentially, that I was about to lose my virginity in public, and if I wanted to, I could go in a private room. I said no, because I’m frankly a little bit afraid of private rooms operated by the federal government, and because I really really just wanted to get a bagel and coffee on the other side of the security gates in as little time as possible. I said, “You can do whatever you want. I’m just excited you’re going to let me on an airplane.”

Excuse me? I don’t even use expletives in my writing, much less explosives.

A supervisor was called over, and my cell phone and laptops were taken away to who knows where to be further screened. I tried to look baffled (which was easy) and casual (which was not.)  What is the etiquette when one is suspected of bringing an explosive laptop on an airplane? I believe I used my talents as a wordsmith and said, “Seriously?”

Whatever it was, the second screening said that I was safe, and I was sent on my way without so much as a fake phone number.

I’d never been so relieved to have the privilege of spending $6.00 on a stale bagel in my life.

P.s. I later found my driver’s license stuck in the pages of the program booklet for the conference.  Don’t ask.

Do you want personal, totally non-spammy messages from Lori in your Inbox? Sign up below for emails sent at completely random intervals with exclusive content.