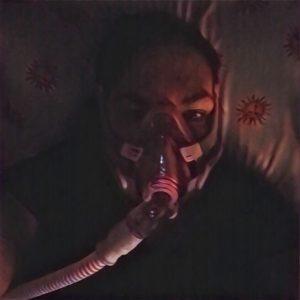 Me, either blasting off into outer space, or trying to go to sleep. I forget which.

Along with age comes wisdom. Also, extra body fat, wiry chin hairs, and an inability to distinguish one pop song from another.  Me, I got an extra bonus – the ability to snore. I snore loudly and dramatically, so I’m told. My snoring is so intense that it actually affects the atmospheric pressure of the house, making the walls bow in and out like in a Tom & Jerry cartoon.

And so, after threats from my family that I would be forced to sleep outside with the coyotes, I went to the sleep doctor to see if there was something that could be done.

At first, I was given a sleep study machine to take home. It consisted of an elastic belt with sensors, a little clip for my finger to see if I was getting any oxygen from my struggles, and a cannula, which, for those of you who didn’t learn that vocabulary word from reading “The Fault in Our Stars” by John Green, is a little plastic tube that has spikes that fit in your nostrils. Cannula are *usually* for shooting oxygen into your nose, but in this case they were there to measure what my honker was sucking in and shooting out all night.

Not the greatest way to sleep.

But, the results came in. Apparently, I stopped breathing about 35 times a minute, and my oxygen level got down to about 75%. I had moderate to severe sleep apnea.

No wonder I was tired all the time.

So I went in for a sleep study at the sleep clinic. I got there in the evening, and changed into my pajamas and brushed my teeth.  A tech glued sensors all over my body and fit me with a mask, before tucking me into a big, fancy hotel-style bed.  I admit I felt a little awkward. The tech was a young guy, probably on the ‘not quite’ side of 30, friendly and chatty, and just good looking enough to be distracting. He was kind enough not to make fun of the fact that I brought my teddy bear for a familiar comfort. I felt like an old, lumpy fool in my flannel sleep pants and t-shirt dating back to the Clinton administration, smiling and nodding as he explained what he was doing.

I tried not to think about the fact that he was being paid to watch me sleep on a monitor for 6 hours or so.  I tried to remind myself that I was probably not the oldest, or the most out of shape, or the weirdest, or the drooliest, or the morning-breathiest person he had to monitor in any given week.

Somehow, I fell asleep, despite the fact that I was admonished not to sleep in my favorite position.  Prince Charming awoke me with a kiss, ahem, I mean the sleep tech guy woke me by saying my name a few times, and I was told to peel the sensors off of the places I could reach. This was a sticky, gooey, difficult proposition, and for a couple more days, I was still finding them in odd places on my body.

But the good news is that the mask worked, and I was eventually given a CPAP machine of my own to sleep with.

CPAP stands for “Continuous Positive Air Pressure.”  You have a mask that fits either just over your nose, or over your nose and mouth (I have the nose and mouth variety) and it shoots air into your breathing-holes at enough pressure to keep your throat open so that you don’t choke on your own flesh like you do with sleep apnea.  It’s kind of fun to play with while you’re lying there waiting for sleep to take over. I always think of this picture I took of my son several years ago, as he was playing with a shop vac:

The sleep machine mask looks weird, and it took some getting used to, but I have to admit it works.  It makes much less noise than you’d think it would, just a quiet and steady “shhhhhhh” like soft rain or a ceiling fan. I get used to the air pressure, and then when I turn it off in the morning I find myself sucking in air for a couple of breaths. I forget how much work it is to have to draw air in under my own power.

I wonder if for some reason I had a heart attack or something in the middle of the night that the machine would count as CPR.

I’m still exhausted all the time, but that’s probably more because of my schedule and the teetering piles of stuff loaded on my plate.  My brain doesn’t feel as fuzzy.  I’m more productive. But the best thing of all is that I’m told that I no longer snore.  So everyone else sleeps better, too.

Sleeping with a CPAP

Sleeping with a CPAP