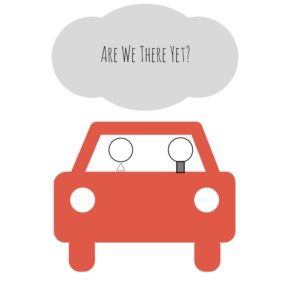 Back before the laws of physics were passed and no one wore seat belts because we all believed it would be safer to be ‘flung free,’ my parents owned a big blue Chevy Caprice Station Wagon.  My sister and I would fight over who got to sit in the ‘way back’ amongst the groceries and spare jackets.  The way back was desirable because we were small enough to pretend it was necessary to roll around every time the car took a turn or came to a stop.

The Station Wagon wasn’t always a mobile amusement park.  It was also a war zone, in which the seams on the seat formed the boundaries of demilitarized zones between siblings.  The borders were always being pushed by a wayward fingers and knees which would result in an escalation of hostilities.

I also remember late nights, which probably weren’t all that late, just dark, coming home from wherever and being sleepy.  I would stretch out across the big sofa of a back seat and fall asleep.  Because I was little.  And I could.  It didn’t occur to me that anything would or could happen but that my parents would wake me when I got home so that I could stumble into my bed.  I remember being rolled a little when we came to a hard stop or made a tight turn, but nothing as violent as the head over heels tumble in the way back and it was all just part of the ride.  It was like being rocked in a cradle.  My Dad would have white noise sports talk radio on, or maybe a baseball game on a scratchy AM station.*  Occasionally my parents would chatter in a stream of mumbles that I paid exactly no attention to.  They were there.  They were in control.  All was right with the world.

Of course, now I strap my kids in like astronauts in 27 point harnesses which will protect them not only from getting a minor boo-boo in a wreck but the powerful force of the side curtain air bags.  They are, objectively, safer, but I doubt they feel that way.  I think they just feel restrained.  Sometimes I catch them lying across the seat trying to take a nap.  I yell at them, citing made up exaggerated statistics about how they will become a projectile if I so much as stop at a stop sign, crashing through the windshield after using their thick skulls like battering rams to knock the rest of the passengers unconscious before their exit.

Over Thanksgiving, I took my little family to visit my parents.  On more than one occasion I found myself in the backseat of my parents’ car as my Dad ferried me and my children to whatever restaurant my mother had a good coupon for.**  I sat there, relieved not to have to be driving for a change, and stared out of the window while discussing what we were going to do after dinner.

We pulled into the parking lot of the restaurant one night, and it suddenly occurred to me that I had no idea where I was, and if you asked me to drive back to my parents’ house without the aid of a GPS I could not.  I pride myself on my sense of direction and generally knowing where I stand in relation to the rest of the globe at any given moment.  But I had no idea.  And I didn’t need to know.  Because I was blissfully able to be a little girl, sitting in the back seat of my Daddy’s car, trusting that someone bigger and more competent than me had it all handled.

I wonder if he’ll let me sit in the Way Back and roll around at stop signs.

*Now, four decades into the future, with the advent of Satellite Radio and CD players, if you get in my Dad’s car the radio will be tuned to sports talk radio, or maybe a baseball game.

**We are not allowed to eat in restaurants if my mother doesn’t have a coupon.

Way Back in the Way Back.

Way Back in the Way Back.