THE BILL OF RIGHTS, AS APPLIED TO PARENTS 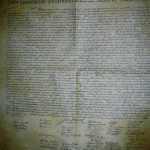 The fact that you have given birth to a child, adopted a child, or in some other way claimed a young ‘un for your own in no way shape or form limits your right to free speech.  If you spill the pink drink in the car, especially if it splashes back on your white pants, you are entitled to free use of any words in your vocabulary, even the ones that make you put a quarter in the swear jar.

A well regulated militia, indeed, is what is required to maintain order when your children come home from tying on the cotton candy, Coke, and frosting at a birthday party.  Bear arms, wooden spoons, time out chairs, or whatever is necessary to keep footprints off your ceiling.  Also, don’t forget your “bear arms” for giving (and getting) bear hugs whenever necessary.

THIRD AMENDMENT: NO SOLDIER SHALL BE QUARTERED WITHOUT THE HOMEOWNER’S PERMISSION

Despite the sticky fingerprints on every single thing in your house, you do in fact have the right to have your own stuff, and you are absolutely allowed to go ballistic if you find pink Build-a-Bear fur stuck in the brush of your new $20.00 mascara.

FIFTH AMENDMENT: YOU HAVE THE RIGHT TO REMAIN SILENT

No, when you’ve just finished a ten hour work day only to come home and put a load of wash in the machine, you don’t have to answer the forty billion questions about where a rainbow goes.  More to the point, you have the right to be IN silence for at least as long as it takes you to go to the bathroom at least once a day.

SIXTH AMENDMENT: RIGHT TO A SPEEDY TRIAL AND TO CONFRONT WITNESSES

Parents are all about swift justice, and confronting witnesses.  Confronting them with the fact that every last one of them will be in trouble if they don’t give up the perpetrator?  That’s totally fair.

SEVENTH AMENDMENT: RIGHT TO A TRIAL BY JURY

The problem with a right to a trial by jury is that it ensures that you get a jury of your peers.  You are Wonder Woman.  You have no peers.  It is lonely at the top.  Lucky for your kids, you were once like them, so you can act as judge, jury, AND executioner, thus helping along that speedy trial thing in Amendment Six.  In any event, if/when you completely lose it, odds are there will be at least one parent on your jury, and it only takes one juror to prevent a conviction.

You can’t mete out cruel AND unusual punishments.  But they can be cruel OR unusual.  Besides, sometimes cruel is in the eye of the beholder – my daughter would tell you that six hours without access to Apple products is cruel.  I might disagree.  As for unusual?  I applaud the creativity of certain parents on the internet.

NINTH AMENDMENT: THIS ISN’T ALL

In the real Constitution, the 9th Amendment says something like, “just because we didn’t say it here doesn’t mean it doesn’t exist as a right somewhere else.”  I think this gives us the right to claim limitless authority and change our minds with impunity.  It’s a little bit of a stretch, but the stretch marks on your belly prove that stretching is sometimes a good thing.

TENTH AMENDMENT: ANYTHING THAT ISN’T A FEDERAL POWER GOES TO THE STATE

This means that if you are tired and simply don’t feel like dealing with it, you can tell your kids to go ask Dad.  Or Grandma.  Or the shady looking guy blowing the leaves off the neighbor’s lawn.  No matter how much of an authority you are, you can always pass the buck.  We’ll call it delegation, because that sounds better than shirking.

Now.  If you’ll excuse me, I’ve got some rights that need enforcing.