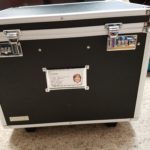 I’m not really a stuff person, not really.  I mean, I have stuff, too much stuff (mostly books), but I recognize that I don’t have much of anything that couldn’t be replaced with insurance money.  Most of my stuff I’d be better off getting rid of.

In fact, most of my stuff isn’t really my stuff at all.  Against my wishes, my house is run more or less like a commune, with very little respect for the concept of personal property, at least when it is my own personal property.  I can’t so much as glance at the top of my daughter’s dresser without being accused of a violation of her deepest, darkest secrets.  But everything I own is, apparently, fair game for ‘borrowing,’ with ‘borrowing’ being defined as “I’ll still recognize it as yours, but I’m going to use it up and/or never give it back.”

I’ve gotten used to the fact that until I’m an empty nester I’ll never have my own personal mascara or bottle of witch hazel, and I’ll never have a box of cookies to myself unless I hide them even after my kids leave, because my husband is the most notorious cookie thief.

I get that if you need something or have an Oreo craving why you might interfere with my things.  But some things I wouldn’t think other people would even want are tampered with.  Such was the case with my Box o’ Book Stuff.  I had a cardboard box, swiped from my office after the 10 reams of paper it used to contain were emptied out.  In this box were some plastic display stands, some framed signs, other marketing materials, and a few copies of my books.  It is the box I use to take with me when I am trying to shill my books at some fair or festival.  I can’t imagine it would be interesting to anyone else but me.

I kept it in the garage.  Our garage, known also as the “Garage Majal” is enormous.  It is approximately 1300 square feet and has 19 foot ceilings.  Due to the hoarding-like nature of my otherwise wonderful husband, it is cram packed full of I don’t even know what.  Very little of that is mine.  But this one box, set adrift in a sea of detritus, was mine.  I thought it was safe there, hiding in plain sight with its uninteresting self.

But no, much like my hairbrushes and scissors and black Sharpies, some little mischievous elf decided to mess with it in irreparable ways.  I went to get it to prepare for the Georgia Library Association Conference.  The top of the box was missing.  This allowed spiders to crawl in and lay egg sacs.  There was a cluster of dried hydrangea blossoms shoved into one of the display stands.  The legs were cracked off another display stand.  Everything was covered in dust and insect remains.  It was disgusting.

Who took the top off and disposed of it?  Why? Why did someone put a hydrangea blossom in it?  Who would break a stand and put it back? Why would anyone who wasn’t me care about anything about the contents of this box or the box itself?

It was one of those ‘final straw’ moments.  I had a tantrum.  I resented how, in this middle class first world life of mine, I couldn’t have anything – ANYTHING – that was mine, all mine.  Not even a stupid recycled cardboard box with uninteresting contents.

While I was at Office Max, still mid-tantrum, I spent an unreasonable amount of money on a fancy black box.  The box has wheels and a collapsible handle with which to wheel it.  The box has a metal frame in which I can insert my identification, making it abundantly clear whose box this is.  And, most importantly, this box has locks.

I can lock my box.  I can keep people that aren’t me from looking inside this box.

I filled my box with my brand new display stands and the other items I needed, including three – THREE – functional Sharpies.  Everything fit perfectly.  MY box.  Perfect for MY needs.  Don’t touch it if you aren’t me.

I used my box at the GLA conference, and loaded it back in my trunk.  I haven’t taken it out of my trunk yet, though it has been several days since.  I’m afraid.  I like it so much, so unreasonably much, in its pristine, organized, clean condition.  I’m afraid if I bring it into my house it will instantly be attacked by pixies with no sense of property or propriety.

It’s mine, it’s all mine, and it is the only thing on this Earth I can say that about.  I don’t want to lose it.

If you enjoyed this and want to read more like it, visit Lori  on Twitter or on Facebook. Lori is the Readers Favorite and eLit award winner for her latest release, “You Know I Love You Because You’re Still Alive.”  She is also the author of the bestselling books “Mismatched Shoes and Upside Down Pizza,” and “The Armadillo, the Pickaxe, and the Laundry Basket.”