Honestly, the day started out just fine if you don’t count the fact that I had to set my alarm for 6 on a Saturday morning.  I drove my son to his rehearsal at the Atlanta Symphony Youth Orchestra, drank coffee and wrote in the audience, and was generally peaceful, if a little sleepy.  I should have known it was the calm before the storm.  You’d think I would have learned by now not to trust anything when it goes smoothly.

We got home about 2:00 p.m., and I hoped to have time to take a power nap before the wedding we were going to that evening.  When we walked in the house, I smelled cookies, and my husband was fussing around the dishwasher.

My daughter, in a domestic effort designed to get her phone back and get off

generalized restriction, had baked cookies, and then cleaned the kitchen, even going so far as running the dishwasher.  “I thought dish soap meant dish soap,” she said, right after oceans of foam began seeping out of the sides of the dishwasher.

Mike threw the soapy towels in the washing machine and, as if on cue, the timer went off.

“More cookies!” announced Marin, and she opened the oven. 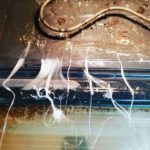 As soon as the oven door swung open, a chemical smell overpowered us.  The cookies appeared to be sitting directly on the oven rack.  There were long, clear-and-white marshmallowy strings of something disgusting dripping from the cookies to the bottom of the oven.

Mike said a bad word.  Maybe two or three.  “Didn’t you use a cookie sheet?” He roared.

After some investigation, we learned that she used the “white, floppy cookie 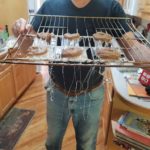 sheet” which was actually a plastic cutting board.  After some more investigation, we learned that my beautiful, many-gifted daughter did not realize that plastic and silicone were different substances.

Marin lay herself down on the floor, puddling herself in a pool of shame.  Having had two major kitchen blunders in quick succession, she apparently decided that even the act of standing or walking out of the room was more than she could be trusted to do successfully.

Honestly, though, it wasn’t that hard to clean up.  It dried to something that looked and felt remarkably like hot glue and chipped off with minimal effort.

Lest my son get off the hook, he managed to lose his phone somewhere.  We still haven’t found it.

So much for a nap.

We showered and dressed, and went to the wedding.  (I am now at an age where most wedding I go to are the children of my friends.  I am going to two this fall.  In both instances I asked the mother of one of the betrothed how fancy the event was.  In both instances the mothers used nearly identical words: “Well, it’s supposed to be very fancy, but they’re having a taco truck.”)  The young couple was beautiful and happy, and the promise of joy they expressed made me forget the disaster that was my kitchen.

Something was in the back of my mind, though, because I know.  Everything comes in threes.

I was eating some delicious tacos and talking to friends I rarely see when my phone rang.  I didn’t recognize the number and so I ignored it.  Then came a number of text messages from numbers I did know.  Apparently the alarm at my office went off, and the police were being dispatched.  This is not terribly uncommon.  Our alarm system is temperamental.  I said a mental “oh well” and went about eating more tacos.

Then the phone rang again, and this time I knew it was the alarm company.  I answered it just as the toasts were beginning, and learned that there was, in fact, signs of forced entry, and the police were waiting for a keyholder.

I said a quick and dramatic goodbye to the groom and his mother, grabbed my husband (who drives much faster than I do) and we headed to my office.

When we arrived at the office, there were three police cars and a tow truck.  What the what?  I stepped out of the car, my silver-sequined top flashing dramatically in the blue lights.

Turned out nothing had been taken from my office.  I don’t know if someone forgot to lock the door and the wind blew it open, or the shriek of the alarm scared off bad guys, but all was well, if not especially peaceful.  It was a crazy night all around – one of the officers had blown a tire pulling into my office, hence the tow truck and the number of cars.

It all could have been much worse.  In the end, nothing was damaged, no one was hurt, and nothing was stolen, though my son’s phone may never be found.  I still have a number of blessings to count, even if I didn’t get any wedding cake, which seems like a venial (if not mortal) sin.

Still, just to be safe, I didn’t leave the house the next day.  Or get out of my pajamas.  Better safe than sorry.

It Comes in Threes

It Comes in Threes