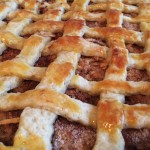 ‘Tis the season for many things, gluttony being somewhere near the top of the list. This being December, there are a never ending string of parties and luncheons; boxes of cookies; home made goodies; and general mass consumption of all things yummy.

I feel like I’ve spent most of the past three weeks on line at a buffet. Starting with Thanksgiving, followed quickly by a sushi buffet, then a salad bar restaurant, and then the first of many holiday themed parties. Plus, our yearly foray to Golden Corral after my son’s All State Band audition, at which my son and his friend Sydney, between the two of them, ate fifteen or sixteen cones of cotton candy in addition to all the yeast rolls and whatever else they piled on. It was a teenage carb-tastic extravaganza.

I know that if you have a dog, and you are going to be gone for, say, two meal times, you can’t leave two meals worth of food out because the dog will eat all the food to the point where the dog will get sick and throw up all over the one square foot of your carpet that is still white, because dogs don’t have enough self control (or sense) to quit eating when they are full. I kinda feel like that these days. The pleasure my mouth gets from the food over-rides the uncomfortable food baby kicking me in the gut.

I don’t know why I do this. I know what I’m doing when I do it, and I know I’m going to regret it. But – I mean, we’re talking Cherry Cobbler and Banana Pudding. It would be a CRIME to say no.

This is such an American problem. I sat in the Golden Corral last weekend, watching my fellow countrymen and women stack plates upon plates of fried chicken and green beans, marshmallowy sweet potatoes, pasta, pizza, stir fry, non-vegetarian vegetables, carved meats, and you name it into Jenga like stacks on the table before getting up to get more plates. I wondered if this sort of all-you-can-cram-down-your-gullet emporium even existed in other countries, and I doubted it. I thought about all the people in the world who have to tote unclean drinking water in pots on their heads to their straw homes where they’d eat rice (again) for dinner, and thought about how obscene the whole thing was.

Not so obscene as to prevent me from pouring gravy on my mashed potatoes, mind you, but obscene nonetheless.

I wasn’t sure I could move. I had made the rookie mistake of wearing pants with a definitive waistband complete with constricting button. This made my food baby lodge between my ribs, up where my lungs usually did their thing, so my breathing was labored. I made jokes about the number of paper cotton candy cones piling up on the table, but didn’t do much to stop them. I fooled myself into thinking that because one of my plates was entirely covered with salad, and another was entirely covered with vegetables, including but not limited to voluntarily eaten brussels sprouts and collard greens, that there was a good bit of nutritional value in what I was eating. Which is true, I suppose, but in the same way that there is a good bit of nutritional value in the entire produce section of a grocery store, but you wouldn’t normally eat all of it in one sitting.

I have, at least, learned this much: always scope out the entire buffet before filling your plate.  Sometimes the best stuff is at the end, and you don’t want your plate to be too full of the stuff that’s just OK so that you don’t have room for the great stuff.

Last night was the first night of Hanukkah, and I found myself in Athens, GA, home of UGA, with some friends and a number of our children. We decided to have dinner at the Varsity, an Atlanta area institution, best known for its chili dogs and fried goodies. It seemed fitting to celebrate the first night of the miracle of the oil that lasted for eight days with a greasy, oily dinner that would sit in our collective bellies for the remainder of the eight day holiday. Another food baby borne of the holiday season.

I think I’ve got a pretty healthy body image. I mean, I know I’m not thin, but neither am I especially huge. I’m basically healthy, and my body does what I ask it to with minimal complaint. I’m tall-ish, big and strong, and can fit in airplane seats and on carnival rides. I can touch my toes and tie my shoes without my belly getting in the way. But lately I feel like it is a contest to see how much I can stuff in my mouth and still find the strength to haul my carcass up a flight of stairs. I’ve got to drag me, my clothing, my purse, and twenty-seven pounds of buffet food and onion rings wherever I go. That’s no small task.

Nope, there’s nothing small about any of this.

I’m Having a Food Baby

I’m Having a Food Baby