I am stupidly excited about going to Dayton, Ohio at the end of this month, even if it has triggered the worst of my social anxiety. 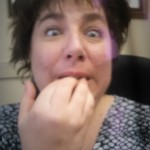 I am attending the Erma Bombeck Writer’s Workshop.  This is the kind of workshop that sells out in a few hours.  I feel fortunate to be attending, though luck had nothing to do with it: I obsessively refreshed the website starting a few minutes before sign up time so I could get in under the wire.  I WORKED for my spot.

And I’ve been obsessed ever since.  I mean, these are my PEOPLE.  Or at least the people I want to be considered a part of.  Strong, independent, funny women, writing true stories about strong, independent, funny women.  I know from the Facebook groups that these are hilarious people: people who have already called me an “ErmaVirgin” and promised me I will make a thousand friends.  I’m pretty comfortable with my ability to make friends in writing.

But what if they don’t like me when they look at my face and hear my voice?  Generally speaking, I don’t give a rip if someone likes me.  But these are the people I want to be.  There’s a number of names of people I’ve heard of, and some I’ve admired for some time.  (I’m talking about you, Jenny Lawson of Bloggess fame.)

I haven’t been this insecure since somewhere around tenth grade.  All the social anxiety I thought I’d overcome has come spilling out in waves that might drown me.

Being a detail girl as a general rule, my brain has decided to focus on the stupid details that don’t matter.  My current obsession is whether or not to get a manicure prior to the Workshop.  On the one hand, a manicure will make me feel more ‘put together’ and confident.  On the other, it might make everyone else think that I’m the kind of person who walks around with evenly-sized nails and smooth cuticles on a regular basis.  I do NOT want to give a false impression.  On the OTHER hand, however, if I go with my regular raggedy nails, will everyone think I’m sloppy in general?  And what if I am?  Shouldn’t they love me for who I am and my sense of humor, rather than whether or not I can find an hour to go get a decent coat of polish on my nails?  But what if they DON’T love me for who I am and my sense of humor?  What if I turn out to be that loud, obnoxious person with a fake manicure (or nasty scullery-maid hands, depending upon my ultimate decision) who just THINKS she’s funny?

To heck with it.  I’m funnier when I’m comfortable.  I’ll just wear yoga pants, college t-shirts advertising events that happened in the late 80s, and no make up, just DARING everyone to judge me on something superficial.

Crap.  I need to go shopping.  What’s the weather like in Dayton in late March/early April anyway?

I mean, I know good and well that it is only my anxious ego that is going to be paying attention to my nail beds.  There are going to be 300 some-odd women (and a smattering of brave, brave men) who are too busy with their own particularized social anxiety to have the time to pay the least bit of attention to me.  I shouldn’t flatter myself by thinking that anyone will give me the time of day long enough to give a flippity-flap about my hangnails.

Instead, I should worry about whether anyone will give me the time of day long enough to teach me something about writing, or to make sure I don’t have to sit at the lunch table by myself.  Or, better yet, worry about whether my own social anxiety will prevent me from making friends with that other woman who has no idea what to wear and is picking at her own cuticles, trying to summon up the courage to go up to someone and say, “Hi.”