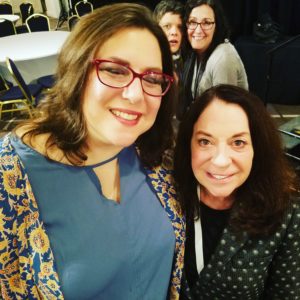 Monica Piper (right) and a Fangirl trying not to squeal (me)

I have this absolutely non-humorous, borderline boring, slightly academic theory on humor, which is that laughter is the pinnacle of mindfulness. That is, when you are laughing, you are entirely in the moment in which you are laughing, and completely unaware of physical and emotional pain or distress, or anything else even vaguely unpleasant. I have a book half written in my head about this. One day it will make it to a keyboard and then a bookshelf, but until then, you will just have to take my word for it.

As a result, I like to make people laugh. I feel like it is a public service. Laughter erases trouble and crosses political boundaries when nothing else will.  I’ve been writing this column/blog now for over six years, and I’ve begged everyone not to take it seriously. For the most part, it has worked. I get very few negative comments, and the ones I get are more along the lines of, “This is not funny,” rather than, “You are a stupid moron who has no right to breathe my air,” like many other columnists who express actual opinions about the world get. Criticism I can handle. Insults, not so much. Humor is subjective, and I’m ok with that. There are people who do not think, for example, that “Young Frankenstein” is the funniest movie ever and who don’t quote lines from “Airplane” every time they hear someone being addressed as “Roger” or “Victor.” They are wrong, but they are also entitled to their (wrong) opinion.

The point is that it is scary to call oneself a funny person.  “You think you’re soooooooooooo funny” is a schoolyard taunt, but yes, in fact, I do think I’m funny.   I’ve won four different national awards for being funny, including one from the National Society of Newspaper Columnists, of which I am particularly proud and which was handed to me by someone who won a Pulitzer Prize.  (I’d also like to point out that I see no conflict between the statements “I do think I’m funny” and using the phrase “of which I am particularly proud,” though I can see why other people might.)

I’ve spent a long time learning how to write funny, which has resulted in a number of people asking me if I’ve ever considered doing stand-up.  I’ve thought about it, but it honestly terrifies me.  Being funny in writing is a completely different skill than being funny in person. Doing stand-up sounded like fun until I thought about what I might actually say and came up with, “Um…..yeah. Knock knock….”  So I wrote it off as a pipe dream, and decided I didn’t have the courage to try.  Or the opportunity, I suppose, but I would have found the opportunity if I were brave enough.

Enter my latest stint at the Erma Bombeck Writers’ Workshop, a once-every-two-years meeting in Ohio of 300 or so funny women (or women who think they’re funny) and about 10 brave men.  We meet to hone our craft, and there is a stand-up night, hosted and coached by Wendy Liebman, who is truly hilarious.   In addition to being funny, Wendy is also one of the sweetest and kindest and most encouraging people I’ve ever met.  She’s also so tiny I feel like I must belong to a different species when I stand next to her, and when I hugged her I feared I might smother her in my ample bosom.

Most of the people to do stand-up were chosen ahead of time.  Not me and one other.  My name was drawn out of a ratty cardboard box about four hours before the show.

So.  It was crunch time.  I was being forced to face my fear, simply by I had to come up with an act in four hours.  My mind kicked into overdrive.  I elected to skip the late afternoon sessions and go to my hotel room on the Dayton Riviera to work something up.  On my way running out, a woman I had met at lunch that very day, Kimmie Dee, grabbed my elbow and told me she needed my help.  We went into a conference room, and she was helping another woman hone her act, and wanted someone else to bounce things off of.  I was extra panicky since, at the moment, I had my own problems, and tried to beg off for that reason, but ended up staying because Kimmie is herself a professional comedienne who produces comedy shows and generally knows what she is talking about.  We worked on my new friend Margeaux’s act, and then worked on mine, which at that point was nothing but a few random lines I’d thought of but hadn’t yet worked into anything bigger.  Kimmie taught me a lot about timing, and why Nutter Butters are funnier than Oreos, and helped me expand some of my jokes by looking up what exactly the 12 Steps of AA were.  After about an hour, I had a working act that wouldn’t embarrass me, if not a good one.  Then I left for my hotel room where I ran into my friend Jill, who gave me a ride and helped me remove unnecessary words from some of my lines.

Then it was just practice.  As I showered and makeuped and drank a medicinal Long Island Iced Tea in order to calm down, I repeated my act over and over.  I changed the order of some of the lines.  I tried hard to think of mnemonics so I’d remember everything.

Then it was show time.  First there was a dinner and a keynote speaker, the fabulous Monica Piper, who is one heck of an act to follow.  Among other things, Monica talked about how the best compliment she ever got was when her father said, “Kid, you’re funny.”  Monica herself was introduced by Leighann Lord, another laugh until you cry comedienne.

There were a lot of funny – professionally funny – and powerful women in the room.  No pressure.  None.

Then it was time.  Wendy introduced us, and I had my time of glory.  I didn’t fill my whole four minutes, but hey – always leave them wanting more, right?  And considering how short a period of time I had to work it up, be thankful you got what you got.  I remembered all my lines, didn’t trip or fall or drop the mic.  I got good laughs from the easiest, most supportive audience in the world, full of friendly faces.  After the show, as we all stood around, Monica Piper came up to me and said, “You’re funny.”

Right then, right there, I felt more accomplished than at any other time in my life.  That two word compliment was the most meaningful I’d ever received.  I was in fangirl heaven. At the end, in the highlight reel of my life, that moment will be there.

As Queen Erma herself said, “It takes a lot of courage to show your dreams to someone else.”  I’m proud of myself for jumping in with two feet, whether or not you think I’m funny.  I think I’m funny, and as long as I’m amusing myself, what else matters?

So.  Since you asked, here’s my YouTube video.  What do you think?