As I sat down to do my business I looked to the right out of habit and saw that there was a basic violation of bathroom etiquette: there were approximately one and a half squares of toilet paper clinging to a brown cardboard tube. 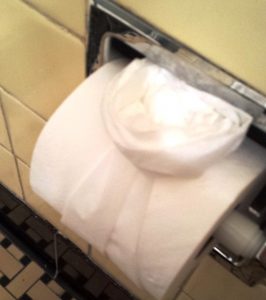 Something inside me snapped.  This is a professional office.  There are seven people who work here, with a combined total of thirty-five years of higher education between us.  There is no excuse for this.  I had visions of holding the offender’s neck down with my foot as I scrubbed out his or her eyes with the toilet brush.

As long as we’re talking about the bathroom, someone needs to explain to me why there is EVER someone else’s urine on the seat.  If you sprinkle when you tinkle, please be neat and wipe the seat.  You don’t want to wipe it up because it’s gross to touch pee?  Well, guess what?  It’s TEN TIMES as gross when it isn’t your own.  My inappropriate vision on this one is with my hand on the back of the offender’s neck, rubbing his or her nose in it like a disobedient puppy.

[Yes, his or her.  We only have one-holers here in the office, and they are all first come first serve.  Wanna make something of it, potty police?]

And more bathroom ranting: why should I EVER in a public restroom, go in to a stall and see the fruits of someone else’s labors.  Flush.  It.  Down.  If it won’t flush, tell an employee.  Yuck yuck and more yuck.  (And pee-yew.)

I get that adulting is hard.  Being responsible is a giant drag.  I don’t ever wanna.  But I do.  Because I live with other people and belong in a society which has to have rules.  That whole golden rule thing?  Do unto others, yadda yadda yadda.  I take that kind of seriously.

And seriously, what is a grown up woman with a semi-respectable job supposed to say when she has to get up and go.  That is, assuming something needs to be said.  Having only recently come out of the life stage where there were small, impressionable children in my house and I had to watch my potty mouth (ha ha) I referred to it as “going potty.”  “Do you have to go potty?”  “Go potty before we get in the car.”  “I have to go potty.”  I have so replaced whatever else I used to call it with the word “potty” that I can’t make my mouth form any other words.  My son, who is 14, finds this unforgiveable.  He chastises me for speaking to him like he’s a toddler.

But what am I supposed to say?  If I’m talking about myself, I can just be vague, like, “Excuse me for a moment.”  But how do I say to another mature human, “Do you need to go potty before we go?” And as I type that, I see the answer, plain and obvious.  A mature human does not need to be asked.  A mature human can suffer the uncomfortable consequences if he or she does not go potty before we go and can wait until we get there.

Of course, a mature human would neither pee on the seat nor use the last useable bits of toilet paper.